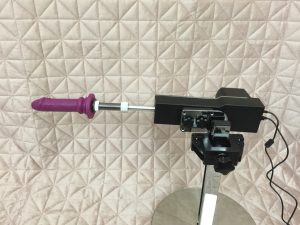 The Diva Bendy 360° Fucking Machine is the third of my recent delivery from sexmachines.co.uk. First was the DP Fucking Machine, then the Turbo Sex Machine, and now the Bendy – Odd name for a sex machine, I grant you. All three have been made by sex machine aficionado’s Diva, and they all bring something different to the table.

The Bendy 360° is a pedestal style machine, which makes quite a big difference not only to the aesthetics of the machine, but also to the way it operates. It’s the first machine of this style that I’ve encountered, the closest previously being the Caesar 4.0, which was more crane-like than the Bendy, so I was eager to see how these design differences changed the experience.

As I was one of the first to receive the new Bendy 360°, my machine came without the manufacturer retail packaging. It was still shipped in the usual discreet and quick sexmachines way – they never disappoint. I totally understand that people worry about having sex machines delivered in case the contents of your parcel are plastered all over the box, but you needn’t worry, nobody will know what excitement is enclosed within. 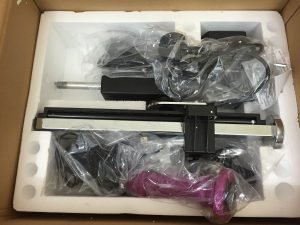 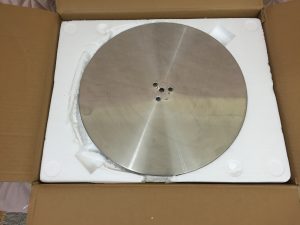 This machine is so simple to get ready for use. The only construction needed is to attach the circular base to the upright using the three supplied bolts. The machine weighs about 8.8kg in total, and the base itself is 5.5kg, meaning the machine has a really stable footing. I think that’s one of the really clever points about this machine. The Turbo is too light for the shape and style of it, but the Bendy is much better proportioned. 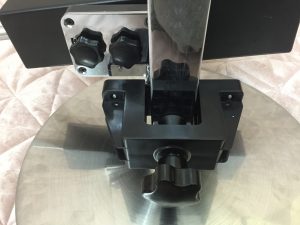 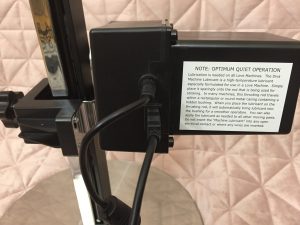 The thrust depth on the Bendy 360° is statically set, so you can’t make any adjustments to suit your preferences. It gives you a 2.5 inch stroke length, which for me feels lacking for anal penetration, because I prefer much deeper stimulation. Vaginally, my tastes are a little more varied, and sometimes I enjoy more shallow thrusts, which this machine is perfect for. It really just depends on your personal preferences, if you’re someone who consistently needs really deep thrusts to keep you happy, then the Bendy won’t be for you. If you’re a lover of more shallow strokes, it’ll be right up your alley, so to speak. 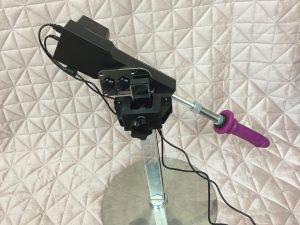 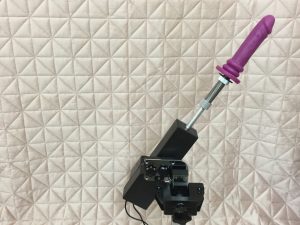 The machine looks quite stylish when compared to some of its more boxy friends. The brushed steel finish of the base looks contemporary, and if you’re happy to be leaving the machine out on display some of the time, it’s certainly not an eyesore. You don’t get a shaft rod with the Bendy, instead the attachments screw directly into the machine. I have 8 inch shaft rods that fit the machine, and you may want to consider purchasing one if you feel you don’t want to be so close to the machine itself during sexy time. 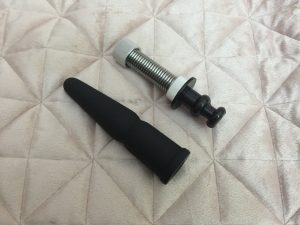 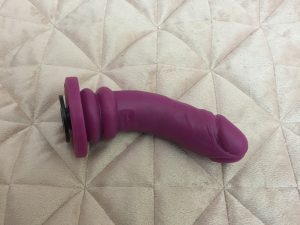 I’ve found this machine to be best suited to on the floor sex. That’s how I prefer to use my machines anyway, but I do always like to try them on the bed too, and the Bendy just doesn’t work very well at all for this. That lovely weighted base that is a blessing on the floor is a curse on the bed. It becomes unstable and too rocky, because it has no firm footing. No bother for me, but a deal breaker for some I’m sure.

The 300 thrusts per minute is a great thrusting output, but because of the 2.5 inch stroke length, it produces a more rat-a-tat kind of penetration. Overall, I think this is a great little machine. I’d happily recommend it to anyone wanting to try their first machine and be able to experience multiple positions. You need to prefer more shallow penetration and be happy to use it on a solid surface, like the floor. If that sounds like you, the Bendy 360° would probably be a great entry level machine to get you started. If you already own a sex machine and are looking to upgrade, or if you’re looking for a machine with full adjustability and all the bells and whistles, the Bendy 360° won’t be for you, but I figure that that’s pretty obvious.

The Bendy 360° Fucking Machine was sent to me for free, from sex machines.co.uk, for an honest and unbiased review. This in no way alters my thoughts or experiences. You can get a Bendy 360° of your own by clicking on this link, alternatively have a browse of their comprehensive sex machine section of their website here. No affiliate links have been used in this post.