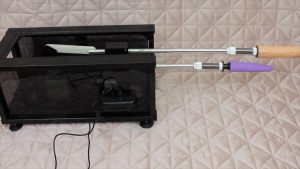 I was super chuffed to be one of the first to get my hands (and other parts) on the Diva DP Fucking Machine. It’s not officially released until Christmas 2016, but sexmachines.co.uk have been given the exclusive early release, so they sent this, along with two other machines, for us to test and review. Yes you read that correctly, three sex machines to review at the same time! I really love putting sex machine’s through their paces, and writing reviews for them, but they’re a lot of hard work. So much more time goes into them than just a straightforward vibrator, I’m not complaining though!

For me, it’s important to get to know the machine, because hands down, sex machines are the things I get most get asked about. I receive lengthy emails with questions about machine’s I’ve reviewed – because they’re an investment, and people want to know if they fit their requirements properly and if they can do x-y-z with them. I’m always happy to answer any of your questions, about sex machines or anything else, so keep em coming! Anyway, I’m rambling now …

The DP Fucking Machine is unsurprisingly, a double penetration sex machine. Clever use of a name there, huh? It’s kind of everything this machine is about, so if double penetration isn’t your thing, you might want to move on now. No bells and whistles here, just unashamed double hole-banging fun. When I first saw the machine, my initial thoughts were that it looked just like a double-shafted Motion Love machine. I was pretty hyped, cause that’s one of my favourite machines, but on getting to know the DP, I can tell you that actually, they’re not all that similar at all. 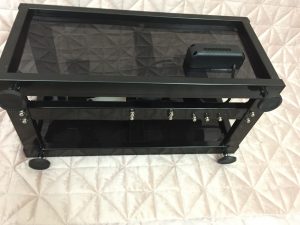 Sure, it’s the same quality Diva product, and they both have the same box-like outer construction, but that’s pretty much where the similarities start and end. The DP has no real options for a customised fuck. You get what you’re given, like it or not. I like it, actually, but this machine isn’t going to be for everyone. You can’t control the depth of thrust – which doesn’t bother me greatly, although it’s a nice option to have on some machines. The stroke length is a pleasing 4 inches. Now obviously, some people prefer more shallow penetration, and others like crazy cervix bashing/anal delving deep thrusts that make them see stars. I like a bit of everything if I’m honest, but I can see why Diva settled on a static 4 inches, because it will please most people. You can’t please all of the people, all of the time with the DP Fucking Machine.

Another reason I think they settled on a static 4-inch stroke length is because of the double penetration element. Both shaft rods penetrate to exactly the same depth, and that’s because of the design of the machine. They’re both connected to the motor, and as it turns, one shaft rod thrusts forward, and the other pulls back, so the rods reciprocate. This makes for a wonderful penetration experience, but more on that later …

Now lets talk about the angle of penetration … 90 degrees, nothing more, nothing less! Hard, relentless, horizontal fuckery is what you can expect to get with the DP Fucking Machine. I wonder if they opted to keep the angle static due to machine stability? I can imagine the reciprocating thrust rods from the motor could lead to a lively machine if you could angle it however you wished. As it is, the DP is a really solid, stable machine, which holds itself well, even on the higher speeds of up to 300 thrusts per minute!

So, you’ve read past not being able to adjust the height or thrust depth, and you’re still with me – that’s great! I know those things may be a deal breaker for some, but the DP still has a lot to offer, and something which none of my other sex machines can do too. Intrigued? Yeah, as I said, more on that later :-p 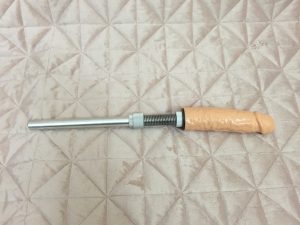 You also get a pair of little love eggs included. I’m kind of on the fence about their addition if I’m honest. I think they’re a good idea, but they could’ve been executed better in my opinion. Firstly, you get two … why? You’re not going to use one vaginally whilst being fucked by the machine, and there’s no way in hell that I’d use one anally, because I’d have no faith that the cord would remain in the egg under pressure. And besides, it’s a DP machine, so again, that hole is being taken care of, you don’t need an egg there too. So that leaves the clit. Okay, that makes sense, and I guess you could use one to stimulate nipples or whatever, but yeah, it just seems a bit odd. There’s also a pretty hefty seam around the middle of the eggs, which means I wouldn’t want them to get too ‘fluidy’, cause it’s a bitch to clean. External, dry stimulation it is then! Two little buttons on the speed controller give them life, and they can be independently controlled, which is good. I guess I’m just disappointed that they’re buzzy little eggs … it’s a mains powered sex machine, surely a bit more power and rumble wouldn’t have been too hard to muster?

It all boils down to your own personal sex machine needs. Does the DP Fucking Machine tick your boxes?

The DP Fucking Machine was sent to me for free, by sexmachines.co.uk, for an honest and unbiased review. This in no way alters my thoughts or experiences. You can check out their full range of sex machines here, and you can grab your own DP Fucking Machine by clicking this link. No affiliate links have been used in this post.