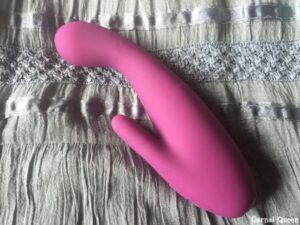 Jimmyjane was one of the first luxury brand toys that I ever owned. Years ago, I splashed out – it was a huge amount to drop on a sex toy back then – on a FORM 2. I suppose I did like it for a while, but in all honesty, I didn’t really know any better then. Before long it got pushed to the back of a drawer, never to be seen again. It had this annoying little thing it would do with the motor, and it drove me absolutely bonkers, and aside from that, I was developing a lust for rumbly vibrations, and the FORM 2 just didn’t make the grade. It was just bzzzz.. bzzzz.. bzzzz..

Meh, I really wish I could sit here and tell you that they have … that the motors on this toy are fantastic and work perfectly now … that they have somehow grown in depth. But I’d be lying if I did. It makes me a little bit sad to be honest, but it really does feel like time has stood still for Jimmyjane. If they had launched this toy maybe 5 years ago, perhaps it may have been more successful, I don’t know. What I do know is, it’s just not competitive in the market today, with so many other far superior alternatives out there.

Let’s start from the beginning. Jimmyjane products do come beautifully presented, I’ll give them that. They’re stylish, elegant and modern, and would make an impressive gift, on face value at least. Inside the box you’ll find your FORM 8, an instruction manual and a USB charging lead. The first charge takes eight hours. Eight long hours! Subsequent charges don’t take anywhere near as long, thank god, cause I honestly lose the will to live waiting. Future charges will give you about two hours of playtime from a two hour charge – I guess that seems fair enough.

The FORM 8 is quite a small dual stimulation toy compared to others, with just 4.5 inches of insertable length. The tip of the shaft is curved for G spot stimulation, and the control buttons are in the silicone at the base of the toy, below the clitoral stimulator. I absolutely hate the bloody buttons. It’s easily one of the worst toys, if not the worst toy I have in terms of the buttons, because they are really fiddly to press. The travel lock is stupidly difficult to get off, even though I do have small lady hands, because trying to simultaneously press buttons that are that close together is beyond ridiculous. It makes me want to throw it hard against the wall … or maybe feed it through a mincer to kill it properly, I dislike it that much!

It’s waterproof, which is a definite plus – not only for bath-time fun (or annoyance), but also for super easy cleaning. Mild soapy water or sex toy cleaner is all you need to keep it hygienically clean, and ready to be stored in its box … for forever in my case. The tip of the shaft is 5 inches in circumference, but it tapers considerably and doesn’t feel at all filling during use. It has three motors, with a whopping (sarcasm, in case you missed it) three speeds and four patterns to choose from. Maybe its just me, but I think that’s pretty underwhelming for a triple-motored, expensive, luxury sex toy. Give us more variety!

With everything lubed up with some Sliquid water-based lube, I was ready to see what this toy could actually do for me. Well, maybe I could use it as a paperweight or a doorstop? Because as a sex toy it does nothing for me. Nada. It sucks. It’s buzzy, like really buzzy! The vibrations are too high in frequency, so much so that they irritate me and make me want to scratch my own skin off. There’s not even a whiff of rumble in sight. Bad times Jimmyjane. If I’m honest though, even if the vibrations were rumbly, this toy wouldn’t work from me, and that’s because of the clitoral stimulator. Imagine the sign you make with two fingers if you pretend to poke someone’s eyes out, then imagine that bashing awkwardly against your body. Not a pleasant thought, huh? I was stupidly hoping that the two ‘ears’ would surround my clit, giving it some all round stimulation, but that really isn’t the case. They’d need to be angled up to do that for me, as it is they just prod me uncomfortably in totally the wrong place. Funnily enough, my pubic mound is exactly that, a mound. If it was as flat as a pancake the Jimmyjane FORM 8 might work, but it isn’t, so unsurprisingly it hasn’t a hope in hell.

Jimmyjane’s take on the rabbit style vibrator makes me a sad bunny. It’s expensive, it’s buzzy, it’s not the right shape for my anatomy, and then there’s that motor issue I mentioned. Sadly, this toy has exactly the same motor quirk/fault/annoyance as my FORM 2 does. Why they haven’t worked at fixing this is beyond me – I’ve spoken to other bloggers who have the same issue across the whole of the Jimmyjane range. It really is frustrating when you’re trying to use it, and I don’t want to be driven wild in rage, just pleasure thank you! If you add any kind of pressure on the clitoral stimulator, the motors kind of kick out. It also does it sometimes when you just turn the toy over. It’s like they jump and judder slightly – Your body is getting used to the stimulation that the toy is producing, and then suddenly the motors change frequency and it makes your clit lose it’s metaphorical train of thought. I don’t want my stimulation to change, if something is working for me (which this doesn’t) then I don’t want it to go and change what it’s doing, all by itself. Sex toys shouldn’t do what they want, they should do what I want.

Back to the drawing board Jimmyjane. I could sit here and happily list numerous toys that are more affordable than this, and that perform a gazillion times better. Okay maybe not a gazillion, but you get the idea. It’s naff. I’m sad, Nuff said.

Lovehoney sent me the Jimmyjane FORM 8 for free, in exchange for an honest and unbiased review. This in no way alters my thoughts or opinions. If you’d like to pick up a FORM 8 for yourself, you can do so here. Alternatively, browse their awesome rabbit style section here. Affiliate links have been used in this post.