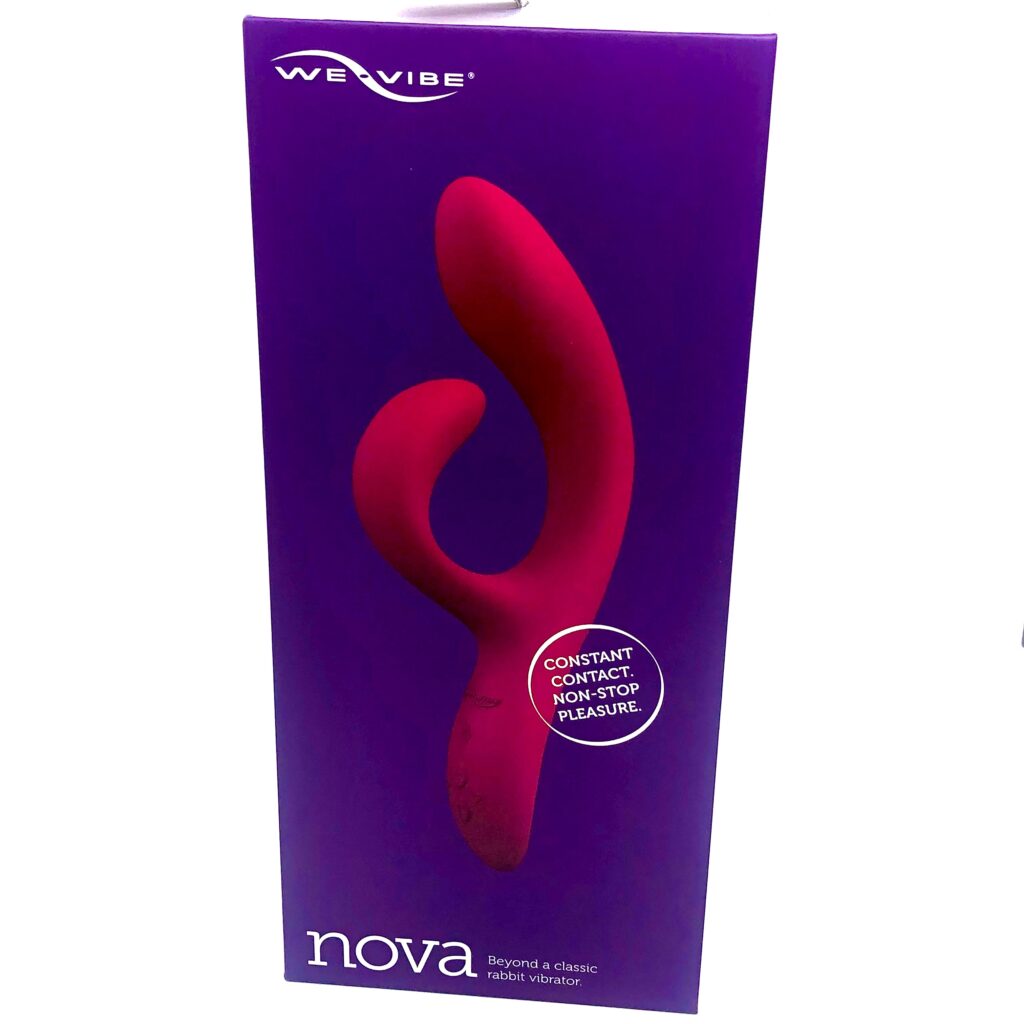 Sometimes a toy comes along that you’re just super excited to try out. Perhaps it’s something that’s just totally new and unique? Maybe the shape or features excite you? Or, as was the case with me and the We-Vibe Nova 2, it’s the second version of a toy that I already previously loved. The original Nova was an epic offering from We-Vibe, it was pretty much perfect and it fit my body like a sex toy glove, so I had very high hopes for the Nova 2.0. But was I just setting myself up for disappointment? 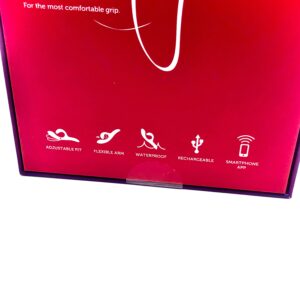 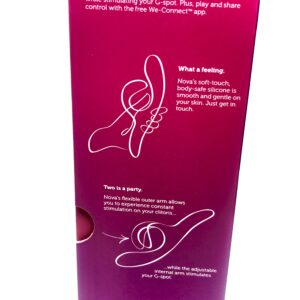 It’s still an app connecting toy, so you can pair it with the We-Connect app and control it with your device or share the connection with another person, so they can control your experience. Pattern lovers will enjoy this feature, as it allows you to fully customise or even create your own vibration patterns. I’m a top-speed Tess, so playing with patterns isn’t really for me. Nevertheless, it is a cool option, and the toy connects well and remains stable during use, so if it is something you’ll use, you should have no issues with it.

The app is also really useful if you want to have independent control of the two motors. You can do it using the toy, but it’s a bit of a faff, and honestly, it’s SO much easier via the app. I’m happy for the clit and g-spot motors to be doing the same thing though, because I whack it straight up to the most intense settings and dive straight in, but not everyone will want to do that. Using just the toy, you have 9 pattern options plus constant vibrate. You also have (I think) 11 speed settings. I’m not 100% certain on that, because those last couple of settings are really close together and hard to differentiate between. The app allows a lot more variation in regards to vibration patterns, but sadly no extra speed settings.

The Nova 2 comes in a silky storage bag. Now, I like a storage bag for a sex toy. It means they’re a little more discreet when they’re being stored, and it stops some of the lint and hair sticking to your toy – like, if you happened to stroke a cat back in 1993, because you just know silicone sex toys like to seek out that fluff and grab a hold of it! Silky/satiny bags are usually fine with me, but this bag is horrible. It’s lined with the same material as the outer, and it feels like they’ve raided a funeral director and used some coffin shrouds to knock up a batch of bags, it’s even the right colour. It makes my teeth feel funny and I don’t really want to be thinking about what I’m likely to be wearing when I meet my maker when I’m trying to get my rocks off. It’s a small thing, but it weirded me out, so it gets a mention. 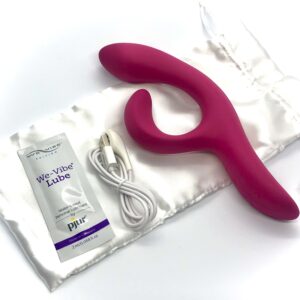 Getting back to the shape. On first glance it looks like the original Nova. It has the same curvaceous shaft and hook like clitoral stimulator – but I knew from the very first moment I tried it that it wasn’t the same, because it didn’t immediately slip into place and hit both of my sweet spots. In fact, I’m quite ashamed to admit it, but my first play with the Nova 2 was such an epic fail, that I got out my Womanizer InsideOut to finish off the job. I was just so frustrated, I wanted to achieve the orgasm I’d been fruitlessly battling for, but the Nova 2 just wasn’t getting me there. I was left a little disheartened by such a negative first encounter, but I was undeterred; I needed to find a way to make it work!

The issue I have is that the clitoral arm is not built to hit me where I need it to. Sure, moving the g-spot shaft around can mean I get it to almost hit the spot, but you don’t win any prizes for ‘almost’, do you? It’s like having an itch on your back and someone scratching it just slightly in the wrong place – you can feel the slight sensations of relief, but it’s not good enough to fully take care of the issue at hand. It’s beyond frustrating. I’m also finding the posable shaft to be a little too posable; it literally clicks out of place when thrusting or moving it in any way, or at the faintest sign of my vaginal walls contracting against it. Not ideal. If it was an adjustment that you had to make firmly by hand, I think it would be fine, but it’s just soooo easy to move. It’s fighting a losing battle to stay in the same position during any vigorous movement or vaginal spasms.

Rabbit style vibrators always require the stars to really align to make an amazing toy for someone’s anatomy. It’s obviously about the shape of the toy and the strength of the vibrations, but it goes deeper than that. The movement caused by the vibrations is often a big factor. I can still have amazing orgasms with this style of toy even if the clitoral nub, or ears on a traditional rabbit, don’t hit their target properly. They just need to flutter or move in the right way to cause pleasure to the whole area. The Nova 2 doesn’t do that unfortunately. Yes, there’s movement around the area, but it’s just not the right kind of movement. It’s hard to put into words what it needs to be able to do, I guess it just needs a bit of the ‘X’ factor! Or is that the (se)‘X’factor?

This leads me on to the vibrations of the We-Vibe Nova 2 – they’re certainly not bad, but they’re not sheet-clenchingly good either, unfortunately. It’s worth noting, I’m a power queen, my vagina, and my clit particularly, need deep and powerful rumbling vibrations. The Nova 2 does produce somewhat rumbly vibes, but only on the lower speed settings. Once you get to level 5 or 6, they definitely hitch up to being of the higher frequency, and dare I say it, almost a little buzzy. I wondered if this was just my interpretation of the toy’s offerings, but CK, totally unprompted when playing with the toy in his hand, said exactly the same thing. So lower levels are rumbly but too low, and higher levels are less rumbly and not quite powerful enough … frustration central. 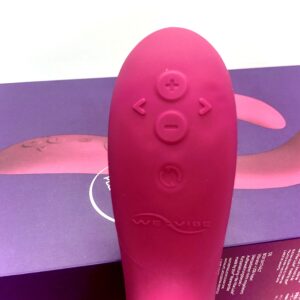 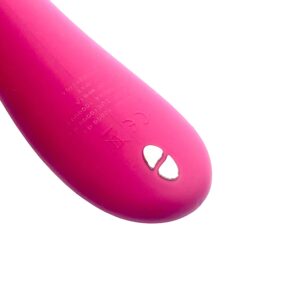 Can I orgasm with the We-Vibe Nova 2? Did I find a way to make it work? Well yes, I can and I did, but not in the way I usually would with a dual stimulation toy like this. I can’t thrust it in and out, because the shaft just abandons the position that I’ve put it in, and the clit arm just stabs away aimlessly in the vague vicinity of my sweet spot. I can’t just leave it in place and let the vibrations do the work either. Admittedly, it’s a rare kind of toy that I can do that with, but the original Nova absolutely was one of them, so it kind of sucked to discover that it didn’t work with the Nova 2; it’s just not precise enough on my body, and the vibrations don’t have the depth of rumble that I need. What does work is a vigorous flicking up and down of the handle. Yes, the shaft continues to reshape itself over and over, but the frenzied up and down motion along with some top-speed, okay-ish vibes gets the job done.

This taught me 2 things; firstly, the handle is a bit shorter than I’d like. On the Nova 1.0 it was almost 50% of the toy, which was much better. This stumpier version leaves me with hand ache (yes, the up/down/up/down adds to it, but a longer handle would definitely limit the uncomfortable nature of it). Secondly, I learned that I was having to work way harder than anyone should have to work with a sex toy. Nobody thinks to themselves “I want an orgasm with a sex toy, but I want to have to work really bloody hard for it”, do they? The whole point is that it’s fun and easy, and when I orgasm from the Nova 2, it’s predominantly because I’ve put the work in to make it happen.

I had high hopes for the We-Vibe Nova 2, but ultimately, it’s just not for me. If I could rename it, I’d call it the We-Vibe ‘Almost There’, because that’s how it likes to frustratingly leave me when left to its own devices, and also because the design of it is almost there for me and my body. The stars just don’t align for us. This style of dual-stim toy is so personal, it’s never going to be one size fits all. People also need different things from their vibrations, what works for me would likely be too powerful for lots of others. Lots of things need to come together, it’s a lottery, and this time I didn’t win, but that doesn’t make the Nova 2 a bad toy. It just means we’re incompatible, and honestly that’s ok. It’s still very much a premium toy, and I know that there are a lot of people out there who will love it as much as I loved the original Nova. Maybe you’re one of them?

Lovehoney kindly gifted me the We-Vibe Nova 2, but that doesn’t alter my opinions in any way, which are mine and mine alone. If you want to check out the Nova 2 for yourself, you can click through using the appropriate link for your region:

Affiliate links have been used in this post. Thank you if you choose to shop using my links, it adds no further cost to you, but supports my blog and means a lot 😀