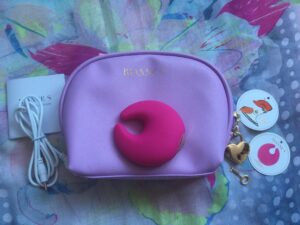 The packaging is undoubtedly different to the norm, and I initially thought it was a bit gimmicky. But do you know what? It’s actually really nice! If discretion is a must for you when it comes to sex toys, it’s actually really practical too. You don’t get a little cotton or satin bag, there’s no bulky keepsake boxes here either, what you get appears to be a neat little cosmetics bag, in a classic cosmetic bag shape. I say little, but actually it’s not that small. It’s easily big enough for your Moon vibrator, some (water-based) lube, and maybe some condoms. You could pop in a pair of handcuffs and a blindfold, and you instantly have a cute little kit for a night away. 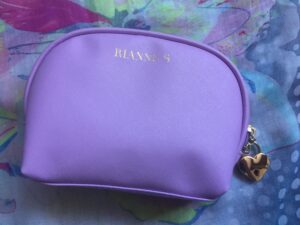 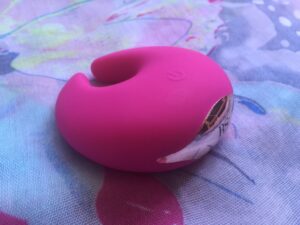 The pale lilac bag is subtly branded at the top with the Rianne S logo, but honestly, unless the person looking at it is an avid sex toy shopper/user, they’re not going to have a clue about what is in it. You also get a little gold padlock, so you can slip it through the holes on both zips to secure the bag in the closed position. It’s only a small lock, so I think it could be forced open relatively easily, but it’s there just to prevent those prying eyes. In my opinion, if the people in your life are so hell bent on seeing what’s inside this little bag, they need a firm talking to for being such nosey bastards! It locks, it stays locked until you unlock it with the little key, it does its job. Simple.

The Rianne S Moon is a USB rechargeable vibrator (lead included), and it has three constant speeds and four different patterns. A 120 minute charge gives you about two hours of playtime – all’s fair in love and sex toys! It’s fully waterproof, so it can be taken into the bath or shower to brighten up those dull daily tasks, and it’s easily cleaned in the sink. It’s made from silky soft silicone which is non-porous and just fabulous, and it’s a simple single push button toy, so there’s no need to swot up on any manuals before you dive in with this. We like simplicity.

After a full two hour charge and a lovely coating of lube, I was ready to see what this little Moon could do for me and my demanding clitoris. It’s an inexpensive toy, and the girly exterior and cutesy image didn’t get me expecting too much, but I was truly very pleasantly surprised! I’m really not into buzzy, go numb and want to scratch my clit off, kind of vibrations. I likes me some rumble and depth! I was pleased to discover that the Rianne S Moon vibrator actually wasn’t at all buzzy, and it had an unexpected amount of depth to it too. Good times!

With the pincers positioned above and below my clit, I’ve got everything completely covered. The direct stimulation this gives me works well, and the rumbly vibrations that it delivers deeply into my tissue means that the sides of my clitoris are getting the slightly more subtle stimulation that they seem to enjoy from the Rianne S Moon. It’s a great shape to hold too – my hands don’t get tired or annoyed by being buzzed to death from travelling tingles, because the vibrations stay at the end of the toy that they’re supposed to. Yay! 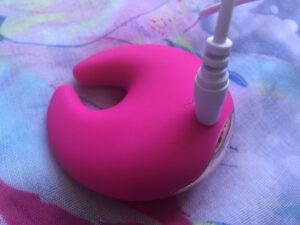 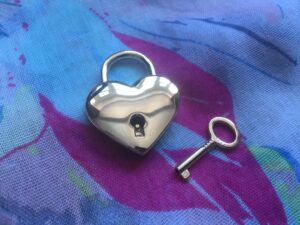 I really like using the Moon on CK during blow-jobs too. The two curved tips sit well against the underside of his cock, and I always know where they are. That might seem like an odd thing to say, but sometimes with a toy with an angled tip, like the We-Vibe Tango, it’s hard to know where the flat bit is sitting in the heat of the moment. CK does seem to approve of the Rianne S Moon, I’ve certainly had no complaints about it 😉

It’s discreet, quiet, USB rechargeable, waterproof and pretty rumbly given its compact size. What’s not to like? If I was going to highlight something that I didn’t like, it would be the mirror finish bit of plastic that sits at the bottom of the toy, below the charging port. I’m really not keen on reflective surfaces on toys unless they’re metal, I just don’t see the point. I’m nit-picking there though, it’s a minor thing.

The Rianne S Moon would make a really lovely gift, and unlike many other sex toys that I would put in the same category in terms of quality and performance, this one won’t break the bank! I love my little clitty-croissant! 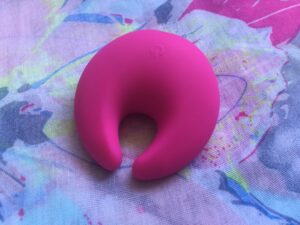