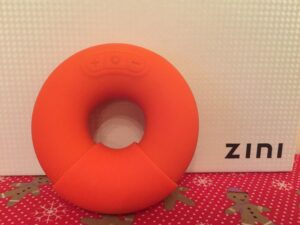 We all love a cup of tea and a donut, right? As a child, whenever I was taken to a bakery and told to pick something, I’d always pick a donut, without fail! They’re still a firm favourite of mine today *battles newly emerged Krispy Kreme craving* so when I received a sex toy from MEO, that looked like a donut, and was even called a Donut, I was intrigued, and a little bit excited!

It arrives nicely presented, in a similar way to the Zini Ran, only this time, the main packaging colour is white. Along with the bright (in my case) orange Donut, you get a nice little storage pouch, instructions, and your charging cable. The Donut is USB rechargeable, and just arrives with the lead, so you’ll need to use your own plug. There’s also a removable silicone end cap, which links the two ends of the donut together, giving it that traditional, ring-donut shape.

The Donut is fully waterproof, and has a charging port which is located beneath the surface of the self-sealing, body safe silicone. To charge, you push the pin through the surface. After charging the toy up for an hour or so, I set about having a play with the vibration settings and patterns. It has five levels of intensity and fifteen pulsation settings, so plenty to chose from. 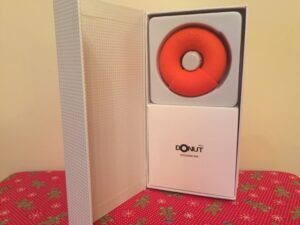 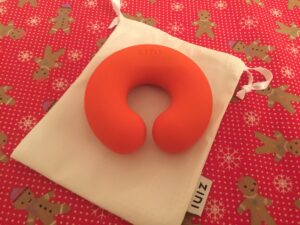 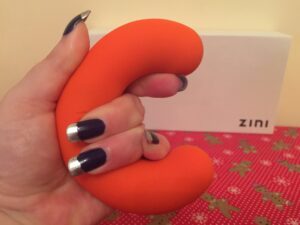 I’ve never been given an orgasm by a donut before, and I’m sorry to say, that’s still the case. Try as I might, I just can’t get off with this thing at all. I’m frustrated, because it does have the potential to be good, but it’s fallen way short of the mark for me. Zini have some great, and some amusing suggestions of how to use the Donut on their website (my favourite being for use around your ear?!), but none of them work for us, at all. Trying to insert it into myself is a workout, especially with a lubed up, slippery toy, I kinda feel like I should be filling in risk assessments for it. By the time it’s in, I’ve normally gone off the idea of using it, and if I am still up for it, the pain it causes puts me straight off. Yes, the Donut is flexible, but it’s also got a memory like an elephant, and wants to return to it’s starting position at the first possible opportunity – even if my body is in the way. I think I now know what it’d feel like to g-clamp my vulva!

It’s too bulky to use as a form of cock ring, CK says it feels annoying around his testicles, it does almost nothing for my nipples, certainly nothing that any other vibe couldn’t do anyway, and I felt a fool sticking it around my ear (Yes, I did try it, for you know, science). The buttons are quite difficult to press, they need a really firm push, which is doable with clean, dry hands, but once you put lube in the mix, it becomes much more difficult. The vibrations aren’t too bad to be honest, they’re a bit buzzy in places, but generally I’d rate them as mid-range. I like the fact that it has two motors, and the vibrations do travel quite well thought the ring, which means it’s quite nice to use on CK for oral sex, so it’s not all bad. Used like this though, you need lots of lube, because it’s pretty draggy. It’s also pretty quiet, so it’s discreet when in use … my swearing and cursing in frustration, is far louder.

I really wanted to love it, because recommending a vibrator like this would’ve had plenty of positives. It’s quiet, it’s got plenty of vibration choice, it would be a great toy to introduce sex toys into a relationship with a more apprehensive partner or someone who’s perhaps intimidated by toys. I like that the shape is different, and it makes it a very discreet toy, because it’s not immediately obvious what it is, it’s waterproof and super easy to clean … but no, just no. I can’t recommend it, because although the concept is borderline genius, a toy with so many applications – like Santa to naughty children, it just doesn’t deliver! I may be off donuts for life now … Doh! 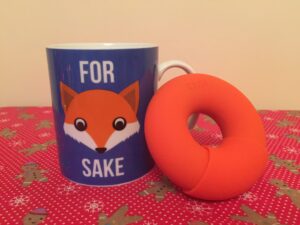 MEO kindly sent me the Zini Donut for free, in exchange for an honest and unbiased review. If you’d like to try the Donut for yourself, you can . Affiliate links have been used in this post.