Chicken or the Egg? 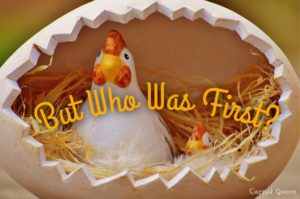 What came first, the chicken or the egg?

A musing (rant) by Carnal Queen.

Do you know? Do you care? SHOULD you even care?

I don’t know the answer either to be honest, in truth, I kinda feel like it doesn’t really concern me, and that’s why folks, you won’t see me getting on my high horse about product related issues that stem back to design and manufacture levels. I know a whole heap of you will think badly of that decision, so I’ll try and explain my thoughts behind it. If you still don’t get it after that? Well, I’ve said my part, and the issue isn’t mine, is it …

Are you sat on a chair reading this? Who first came up with the concept of a four-legged contraption that you sit on? It’s likely that you won’t know the answer to that without hitting up your mate Google, and that’s fine. I don’t know either. What I do know is, all chairs aren’t made equally. You’ve got bigger ones, smaller ones, heavier ones, ones made from different materials and that differ in colour and shape. It’s still a chair. Someone, somewhere, will likely be annoyed that your chair looks as it does.

If you make a chair that looks like an exact replica of an IKEA design, you’d expect that the Swedish Giants would come running after you, throwing meatballs at your head and drowning you in Lingonberry juice (wtf even is that?), wouldn’t you? If it’s patented, they’re protected, and you’re done for. Question is, before you bought the chair your ass is currently cradled by, did you research it thoroughly? Did you make sure that there wasn’t one that looked similar, but that was in fact created prior, to your pew of choice? No? I didn’t think so.

The sex toy market is rife with ‘grey areas’ concerning who did what, first. There’s a lot of angry voices out there, claiming this and that. The fact is, it’s not just the sex toy market that’s rife with potential patent infringements and the like. It’s everywhere! Pop over to Pinterest and see how huge ‘dupe’ cosmetics are – they give you the same colour and effect as the likes of Kylie Jenner or Mac, but without the cost. Go to any market around the world and see countless designer products, that all look perfect, and at such an amazing price. You know they’re fake – a lot of you will still be rocking that Louis Vuitton bag like a pro though.

Go into a supermarket. See the shelves filled with all the brands we know and love. From food, to household cleaners, alcohol, and everything in between. Heinz, Walkers, Flash, Andrex, Stella Artois, Warburtons … now look at all the supermarket’s own brand stuff. Trying to replicate those million dollar companies top products … you see where I’m going with this?

Are you the kind of person that buys the best of everything? Does your pizza come from only the big names, or do you get it from the local delivery place because, you know what, it tastes just as good? Are there no designer bits of dubious origin, or cosmetics from cheapy brands in your house? No perfumes or aftershaves that you picked up because “bloody hell, that smells just like Dior but it was only a tenner!”?

I try my best to not be a hypocrite in life, and for me to be out there, screaming about patent issues, that quite frankly aren’t my forte, I’d need to adopt that attitude throughout my whole life. And I can’t, it’s not practical. Firstly, I have no idea who is right or wrong. Without spending hours researching something, how am I to know if company X came up with the idea before company Y? It’s simple, I don’t. What I do know is, patent laws are there for a reason, and if they’re infringed in any way, I’m going to trust that the companies that have been copied will deal with it. Because frankly, it’s in their interest. I’m not going to listen to keyboard warriors who try to tell me what I should be thinking or doing. All the nope.

Secondly, I’m a sex blogger, and I write product reviews. You know what that means? It means I do what I do for my readership. Not for the companies I work with, although sure, it’s great to be able to give great companies exposure. But my main focus is, and always has been, my readers. They buy sex toys, and they’re going to do that anyway, but hopefully the ‘community’ of bloggers out there can help them with their choices along the way. It’s not my job to tell them which companies to buy from, based on morals or ethics surrounding design, it’s my job to tell them about the products, and the safety of them. I’m not a lawyer, so I’ll stick to leaving the legal stuff to them, if indeed there actually is anything legal to deal with.

Then comes the issue of cost. There are people who whole heartedly believe that some companies HAVE to charge what they do, and that that’s simply the cost of that type of product. WRONG. I don’t claim to know everything about the business side of the sex toy industry, because it’s not something that concerns me or interests me overly, but what I will tell you is that many of the larger, more commercial companies have a large, profit margin, and this is a fact. Smaller, more artisanal companies absolutely don’t, but that’s a whole other kettle of fish.

My point is, sometimes there are other, more affordable options out there. That are what they say they are. They probably work on the theory of small profit, quick turnover. Make less of a margin on a product, but sell more of them, so everyone is happy. Some of these products may look similar, but it doesn’t mean they are the same. Dimensions could be different, weights not the same, corners cut on over-the-top packaging costs etc. If they’re out there, and they’ve been out there and popular for a while, I’m going to assume that there aren’t any companies with legitimate patent infringement issues. Because if there were, their lawyers would’ve quashed them quickly.

I’m a blogger. I blog my experiences and opinions on adult products. I’m not a lawyer, I don’t work for any sex toy companies, and I’m not one of their guard dogs tasked with protecting them either. Providing it’s safe for my body, I’m happy to review the good, the bad, and the ugly, to help people make informed decisions about their purchases. If you want to shoot me for that, well I’m sorry, but I’m not going to change.

For the record, I absolutely do not condone patent infringements whatsoever. But I’ll need and want to see the proof behind the theory before I start steering people away from legitimate, affordable alternatives. Not everyone can drop hundreds on sex toys, but they still deserve quality and safe goods. Counterfeit is a whole other ball game, if a product is masquerading as something it isn’t, then that’s not on at all, but to be considered counterfeit in my eyes, it would need to be branded and packaged EXACTLY. Similar is just that, similar.

When I figure out what definitively came first, the chicken or the egg, I might feel differently, but for now, I’m happy living my life hypocrisy free 🙂