CQ Explains: No, It’s NOT Okay to Fat-Shame 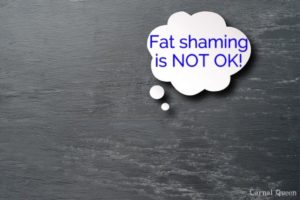 What happened, and the why’s …

First off, I’m sad that I’m writing this post. Well, more sad that I feel I even need to write it, would be more accurate. But it’s become apparent that it did need writing, and that for some reason, I need to justify my actions surrounding recent events. It’s all good, I’m happy to be transparent, I have nothing to hide.

So the whole fat-shaming, non-consent Trump tweet, and general monumental fuck up by @buysexmachines …

On the 1st September, sexmachines.co.uk sent out a tweet stating “Even fat pussies need love” with a video of a curvaceous, naked lady attached … vile, vile, vile, vile, VILE. I responded to this tweet the moment I saw it, telling them it wasn’t acceptable. I was the first to respond, and I was one of only two. Admittedly, I didn’t go in with an iron fist, but at this point it was a one off. I voiced my opinion – one which clearly, by the lack of other responses, wasn’t shared with the rest of their following.

Now, in the interest of transparency, I’ll tell you that I saw that tweet quite by accident, because @buysexmachines account is muted in my Twitter. I understand their following like to see their machines in action, and I respect that, but I don’t want pornographic material opening up on my large phone screen when I’m out in public. Hence why anyone who regularly tweets content like that is muted. When I first followed their account, I was one of only a handful of people that did. They now have over 12k followers. It’s fair to assume that the majority of their followers appreciate their tweets.

My error here, and the only one I believe I made, is assuming that the right people would’ve seen me calling their inappropriate tweet out, and that it wouldn’t happen again. As we all know, that wasn’t the case.

Fast forward to Monday the 17th October. Again, quite by accident, I discovered that it wasn’t just an isolated tweet six weeks ago, and that 2, possibly 3 more had been tweeted. I was appalled and disgusted, as were many people. And quite rightly so.

Realising that my previous response to them on Twitter clearly hadn’t fallen into the right hands, I emailed the boss of sexmachines, David, directly. Think about that for a moment. I’ve worked directly with them on several occasions, and they’re currently advertising on Carnal Queen. I had access to speak directly with the man at the top, so I used it. Who wouldn’t?

Whether you agree with him not being involved with their social media interactions or not, the fact remains that he was unaware of the situation. Do we think the CEO of M&S logs in and tweets for his company? Doubtful, isn’t it. David has never been anything other than professional and a pleasure to work with in my experience, and I had no reason to doubt him when he responded to my email IMMEDIATELY.

He hadn’t seen the Twitter uproar, and he thanked me for contacting him and highlighting the massive issue. I’ll be honest, I had no idea how he’d take my email when he read it. I made it very clear to him that I wouldn’t tolerate disgusting behaviour like that from a company I was associated with, and that I’d sever my relationship with them in full, if it wasn’t responded to in the correct way. And yes, obviously that would include advertising, just to be clear.

You see, as a now slightly overweight, once hugely overweight woman, I took massive offence. It’s horrific, disgusting behaviour. And as the blogger that’s most closely associated with their company, I absolutely did NOT want to be connected with it. I sent that email fully prepared to pull the plug and walk away.

David responded immediately. He seemed genuinely horrified and shook up by the whole mess. He understood fully why I couldn’t and wouldn’t remain linked to a company who thought that kind of behaviour was ok. He doesn’t think it’s ok.

After removing the offending tweets, tweeting and pinning an apology to their Twitter account, and then apologising to me via email, he then went on to reply to some of the tweets personally. I agree this was the right thing to do, but I do also think he went beyond what others might have done. To respond directly to some of the big names out there in the blogging world, instead of trying to brush it under the carpet earns a bit of respect from me.

An employee of his company behaved in a way that was totally unacceptable. He’s taken responsibility for that, and done everything right, so far, to deal with it. He’s told me he’s talked to all those with access to their social media, and that he’ll be monitoring it himself from now on too.

I called him out. I gave him right of reply, and now he has replied, correctly, I’m going to sit back and hope he follows through on his promises. I’ve never had any complaints about sexmachines. They’re a quick, efficient company who are always happy to help customers and answer questions. I have a lot of interaction with my readers regarding them, both before their purchases, answering machine questions etc, to afterwards when they contact me again to let me know how they’re getting on with their purchases.

I put a lot of time and effort into answering questions surrounding that company. They don’t pay me for this, they only pay for their ad-space on Carnal Queen, just like anybody else does. I do it because of and for, my readers. After months and months of nothing but positive interactions, I’m willing to accept this could genuinely be an employee with a very warped sense of what is appropriate or funny.

This situation, in my opinion, is worlds apart from previous fuck-ups like ‘GetFiFi’ or A Touch of Glass. Companies which either made light of their tactics and tried to stand their ground, denied it, or threw lie after lie into the mix. They had the opportunity to be honest, to try and right their wrongs, but they fucked things up further. Sexmachines haven’t done that. Whilst you may not like their Twitter content, this issue was about 3 or 4 tweets on the whole. They’ve been quick to respond, and have taken the correct measures to stop the mess. What more could I want? Blood?

I have no idea what David would say about the way I’ve handled the issue. I’d hope he’d say that I’d been firm but fair. I’m fairly confident that he understands I will absolutely dissolve my connections with his company if it happens again. I’m not banding threats around like a boss – I’m merely standing up for what I think is right, and protecting my own brand too. I’m not ashamed of that either, incidentally. I’d hope he respects me for that.

As far as I’m concerned, for now, it’s done with. Time will tell if it was just a cataclysmic error by a staff member, or some fucked up marketing strategy on a larger scale. I won’t continue to call them out on social media about it, I’ll give them the chance to prove themselves, either way. Because I believe that’s right, and that’s fair. I don’t agree with continuing to pursue someone after they’ve apologised and they’re attempting to put things right. People and companies make mistakes. It happens.

If I tweet about my feelings or thoughts around a subject, it’s because that’s how I feel. My definition of a subtweet seems to have been off the mark slightly, but that’s fine. I’m quite baffled by people calling me out for subtweeting (when by definition, my tweets weren’t), but then going on to do exactly the same about my actions. I’m fine with it, but it’s a shame that people don’t look at things from multiple sides first. As I said, I’ve nothing to hide.

I also genuinely believe that the vast majority of bloggers, in this situation, would’ve gone straight to the top, as I did. When it’s clear the message isn’t getting to the right people online, surely going for the most direct route, to make your point and get a resolution, is a good thing?

I’m not going to apologise for my beliefs, or how I do things. There’s been talk of UK/USA differences when it comes to how we handle things. I don’t know, to me I was just doing the decent thing by giving them the chance to put it right. But it is a valid point that raises questions. Countries/cultures/generations/belief systems are always going to be different. Social media makes the world a smaller place, but we should always stop and think about things from a broader perspective. Not just as bloggers, but as companies and customers too.

I have no issues with calling out companies publicly. I’ve done it myself, and not just with sexmachines either. I chose a different approach on Monday, because social media interactions weren’t working. I absolutely do not condone those tweets, but I’m also willing to accept that it could be a relatively isolated incident of a handful of tweets, across a few weeks, from a very misguided employee. If it isn’t, I’ll be out. It’s that simple.

If anybody has any issues or questions then drop me an email ([email protected]). I’m happy to discuss things further. I do hope that I’ve covered everything in this post though, and that we can draw a line under this – hopefully for good.

We might all have different methods, but we all want the same thing. Let’s get back to the good stuff ????????