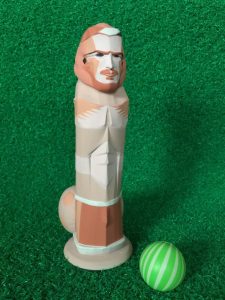 Well, serious they were, and a growing brand they are. Whilst the number of ‘celebrities’ available is still fairly limited (The Kock, Buckhem & Leboned), they’re already making plans to expand the range, and followers to their Twitter account will have seen some suggestions for new additions already.

The thing I couldn’t quite get my head around is the fact that they’re made of silicone. Obviously, it’s a mahoosive plus point, but novelty items like this are often made of cheap, porous shite, and yet here we have one that’s produced in a totally body-safe material – Hmm, maybe this novelty is less of a novelty than I first thought.

When I was asked to review the Buckhem, I was intrigued to see what sort of experience I was going to be getting. I was also curious about the quality of the dildo, and about the overall finish, and I’ll also admit to being a bit weirded out. I’m no stranger to shoving things inside me in the name of product testing, but I’ve never stuffed anything up there that bears a resemblance to a person. And whilst I’ll freely admit that David Beckham, like a fine wine, has certainly improved with age, he’s never really been my bag, and football certainly isn’t my game. The things I do for my readers … ? 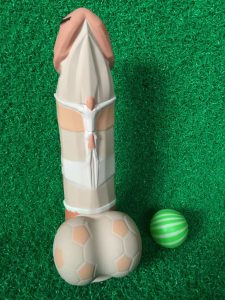 Buckhem is just under 8 inches tall, with almost 6 inches of insertable length. He has a suction cup base, and a girth at the widest point of around 5.5 inches. He’s very firm, with only a little amount of flex in the shaft. The silicone work is highly detailed, but it’s very smooth and silky. Celebrity Dildo say he should be totally odourless, but I have to say, mine definitely has an odour. It’s not overpowering at all, but it won’t go, no matter how hard I scrub, or dishwasher the poor fella. This made me question the material he was made from, and led me to do a flame test. After consulting this guide from the dildo-pyro goddess that is Dangerous Lilly, I do believe it’s silicone. It took a little while to ignite on the base, left black soot that was easily rubbed off, produced pale grey ash, and has damaged the base fractionally, leaving a slightly sticky patch. So assuming the silicone is indeed silicone, I’ve no idea why he’s has a gentle plastic-like whiff about him. Strange!

The detail on Buckhem is a sight to behold. He’s got his football shorts, including noticeable groin bulge. A pair of big, firm (ahem, golden) balls. There’s a representation of his Chinese side tattoo, which means ‘Death and life have determined appointments. Riches and honour depend upon heaven’. And there’s also his huge guardian angel back tattoo, which reaches around to the front of the dildo. His facial features are surprisingly lifelike, although his hair style is kind of crazy, and he’s wearing some sort of headband. His head is probably the most unrealistic part of it, although I’m guessing it took this form so it could loosely mimic the head of a cock! His chin line forms the coronal ridge, and the back of his head culminates to a peak where the frenulum would be, if he were a real cock. No comment.

So, the million dollar question is, is he a serious sex toy?

Surprisingly, yes he is. He’s absolutely not going to be for everyone, as the texture from the detailing is pretty intense. He’s also pretty girthy, so added to the detailing, this makes for a sex toy suited to texture/size queens and intermediate players. So beginners beware! I actually prefer to use Buckhem upside down for the majority of a session, because those huge balls make a great place to hold to get a good firm grip. I need more lube with this toy than many others, so a good place to grab is great. I also find his nose a little pokey most of the time. As I near orgasm, it’s nice to twist him around and allow his nose to work on my G-Spot, but if I try to do this from the start, I find it a little annoying and it eventually would get sore.

So far, he’s stood up to repeated use, and cleaning, with no detrimental effects. I do wonder just how long this will be the case though, as a lot of the detail is fine, and has left small features which will naturally be more vulnerable. His nose for example, when pressed, it creases along the bridge, and my concern is that one day, it will split. Talking of splits, there’s a very tiny one where the body of the dildo meets the suction cup, of about 5mm. The suction cup functions well, and it happily stays attached to the side of the bath for a session, but under pressure, this split, which looks like it may have been born from the de-moulding process, may tear further. 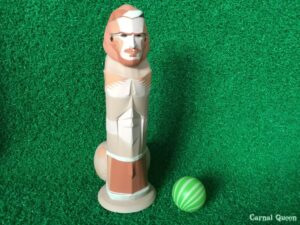