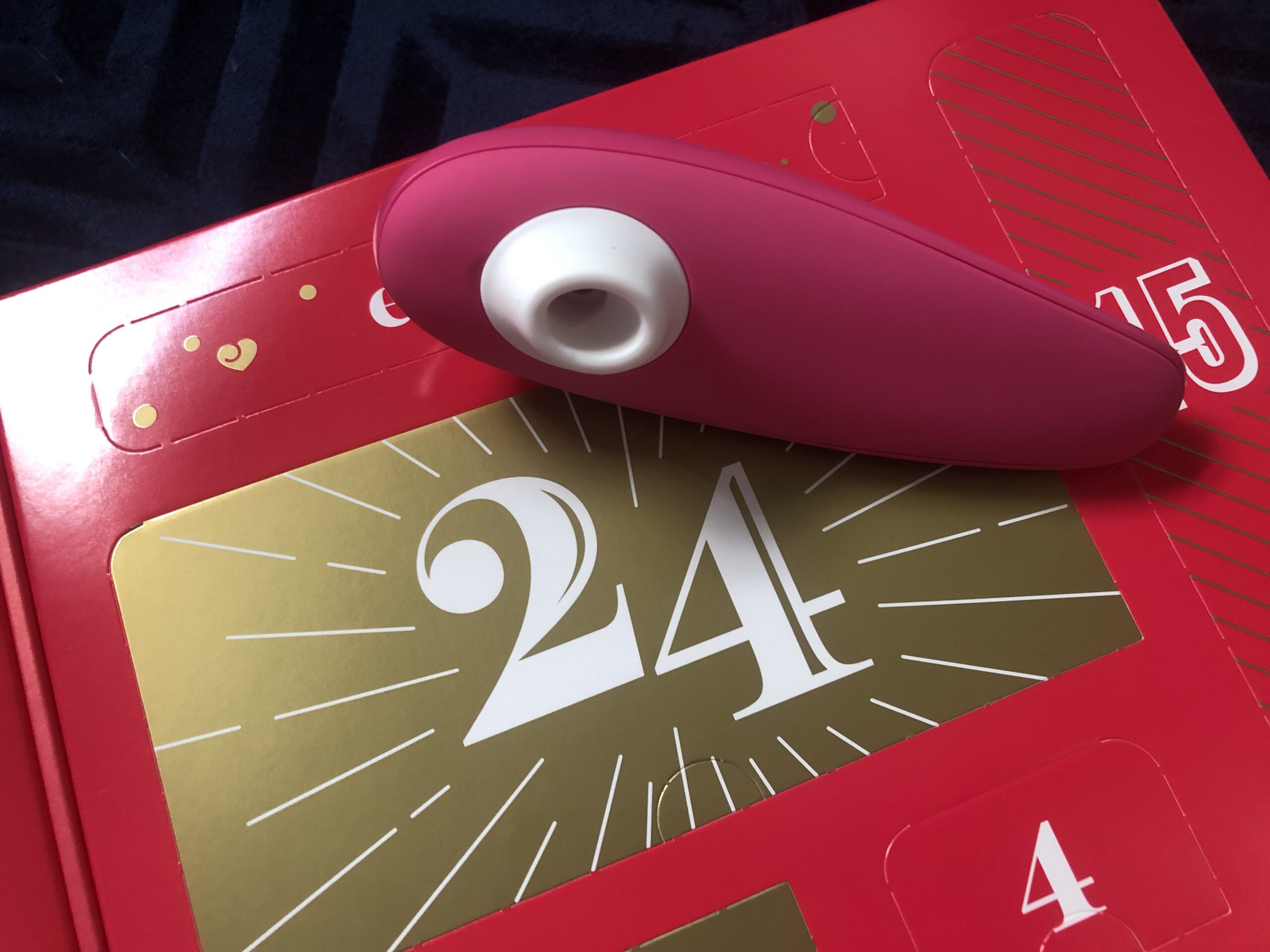 Okay, so for anyone new around here, let me give you a little bit of background information about my experiences with Womanizer as a brand. I first encountered Womanizer in November 2014, when I had the privilege of testing the first ever unit at Lovehoney via their toy-testing scheme. The model they sent me was the W100, and quite frankly it was a hideous looking thing that I didn’t hold out much hope for – from what I could gather, neither did the staff at Lovehoney! I remember Cazz (the lady who ran the testing scheme at the time) being quite surprised when I reviewed that toy so highly. I think everyone was surprised by how much I liked it, including me. The technology and the stimulation offered by a Womanizer sex toy is not like your traditional vibrator, and in November 2014 I fell head-over-heels in love with that kind of pleasure device, and I’ve loved it ever since.

Since then I’ve gone on to test the W500, which I absolutely adored, and the Pro40. Even though the Pro40 is a stripped back and budget version, it’s still a fantastic clit-sucking machine. Each of the different models offered something slightly different in terms of intensity and design, and none of them ever left me feeling disappointed. So I was naturally very excited to find out that the Womanizer Classic was the gift behind door number 24 of Lovehoney’s 2021 advent calendar! (You can read the review for the advent calendar here) There have been a few years now between models, and I was eager to find out if that meant any significant changes with their toys. I’m not going to lie, I was also a little bit nervous. I always am when I test something new from Womanizer, because the W500 is probably my favourite toy of all time (bold statement, I know), and when something is on a pedestal like that, I think it’s natural to be scared that anything that follows may potentially be a letdown. So how did I get on?

Firstly it’s worth mentioning that when you buy the Womanizer Classic on its own it comes with two stimulation tips and a storage bag. Because I got this in an advent calendar I only got the unit itself with one tip, and the charging cable. Not that this bothered me, because my experience with Womanizer tells me that the standard tip is the one I would prefer to use anyway, and I can live without a sex toy storage bag. Gone are the days when Womanizers would come in a hard storage case like the W100 did, which I do think is a shame.

In the hand the device feels oddly quite basic. It’s made of rigid plastic and it has the two prongs that allow the charger to connect magnetically near its tip, an on/off button, and a plus and minus button to increase and decrease the intensity of the suction. All of these elements are on the back of the toy, and the suction portion is on the front. It’s 100% waterproof and it has eight levels of intensity for you to experiment with. Womanizer has gone on a little bit of a journey as they’ve progressed through the various models; they’ve added different power levels, removed blingy crystal buttons seen on the older models, and added the waterproof aspect to their toys. Throughout all of these changes one thing has remained the same, and that’s how the stimulation feels when you’re using it. I’ve tried many different types of clitoral suction devices since my first foray in November 2014 with the Womanizer W100, and whilst they’ll all technically do the same thing, every single Womanizer device feels like a Womanizer. There’s just something about the way the device gurgles and pulses against your clit and the sensation that creates that has remained consistent throughout all of the Womanizer models. Yes the levels of intensity may have changed – with the W100 I loved the top setting, yet with the W500 I preferred to use number five or six – but they still all had that Womanizer familiarity to them. So much so, I have always been confident that I could blind test clitoral suction toys and know instantly if it was a Womanizer or some other toy.

I’m pleased to say that hasn’t really changed with the Womanizer Classic. It still feels synonymously Womanizer. It’s still guarantees me an orgasm, and it’s still able to rip one from me in superfast time if I want it to. If I’m honest, I feel like I want this model to have an extra maybe one or two intensity levels, but that’s possibly me just being greedy. I’m a power queen, and I just love the sensation that this toy creates, and I’d just like to feel it a little more intensely. No bother though, it still does its job like a boss, and I still think it’s fantastic. The fact that you can get this in a £120 advent calendar when the RRP is £119.99 on its own is kind of crazy, and I really hope that there are tons of women out there that get to try this kind of stimulation because of that cracking deal. Even at the full retail price though, I genuinely believe that a Womanizer is still worth every penny. It’s a sensation like no other, and it provides you pleasure in a way that no other kind of sex toy can.

So everything is tickety-boo then, right? Well no, not really. I’ve honestly felt so conflicted when I’ve been testing this toy and writing this review. On one hand I adore what this toy can do to my body, and I know to thousands of other women’s bodies too. Then on the other hand, because I’ve had a lot of experience with other Womanizer models, I know that this toy has in some ways gone backwards. There was a feature on all the previous models that I’ve tested that I knew I loved, but I don’t think even I realized just how much I loved it until now. It’s now surprisingly vanished from this model, and I am really fucking sad about it. That feature is what I used to call the ‘kill switch’, and it meant that with just one press of a button (the power button or the mode button) I could knock the machine back to level one super quickly. You might think that that’s not really very important, but honestly it was something I loved to do which enabled me to ride out my orgasm in the best possible way. There’s nothing worse than orgasming hard and being so oversensitive that you can no longer stand the direct stimulation, to the point where you have to remove it immediately. That almost allows your orgasm to fall off a cliff, and it really sucks, pardon the pun. The ‘kill switch’ meant I could enjoy that really intense stimulation and powerful orgasm and then by kicking it back to level one I could enjoy the after waves of my pleasure and eek out every single split second of pure bliss. I can’t do that now. ? 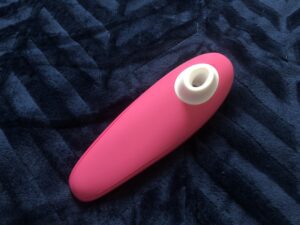 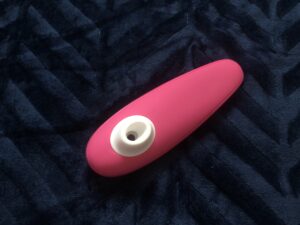 Now that Womanizer has removed that feature, I’m only really left with two options. The first is to rip the toy away from my clit as soon as I climax, which means I get that hard bump back to reality, which feels cold and harsh. My second option is to frantically press at the minus button to bring it back down through each level individually. That second option, whilst good in theory, isn’t actually that easy to do for me. Because this is a suction toy, it doesn’t just rely on the intensity levels to deliver pleasure. It also relies on the seal that’s formed where the silicone nozzle meets your body. Essentially this means to control your pleasure you can play with the levels to see which you love the most, but you can also play around with how hard you press the toy into your clit to alter the sensations it brings you. So when I’ve just orgasmed and I’m supersensitive, any movement on the minus button to bring it down through the levels alters how hard that toy is connecting with my body, and it’s just not particularly pleasurable. Whilst the buttons are easy to press, each press does unfortunately translate into movement on my clit. When it’s buzzing from a delicious orgasm, it doesn’t want the suction to suddenly feel more intense because I’m now pushing it against me harder as I’m turning the toy intensity down.

It might seem like a really trivial adjustment, but honestly it’s completely changed the way I orgasm with a Womanizer. Yes the orgasm is still as fierce and amazing as it always was, but I’m no longer able to ride it out and enjoy that post orgasmic blissful comedown in the way that I could before. If you’ve never had a Womanizer I’m confident that you will most probably absolutely fall in love with this toy, and rightly so. The black-and-white of it is, is it’s fantastic at its job. But if you’ve already had a previous model, and you really enjoyed that ‘kill switch’ feature, it’s impossible not to feel like this model is actually a downgrade. And I really hate that I’m saying that.

If I win the lotto, I would absolutely love to commission Womanizer to make me my perfect version of their amazing toy. I’d take inspiration from all of their models and merge all the best elements together to create something that would be mind blowing. In my opinion they have been so close to perfection before, and I just feel like they’ve taken a tiny step back with this toy. As it stands the W500 has been the closest to perfection there has been, and I am so sad that that toy is no longer available, at least through Lovehoney. 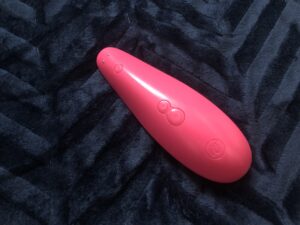 I was kindly gifted this Womanizer Classic by the lovely folks at Lovehoney as part of their 2021 advent calendar. This doesn’t alter my thoughts or opinions, which are always mine, and aren’t for changing! You can click through and read about the Womanizer Classic at the appropriate shop for your region below: