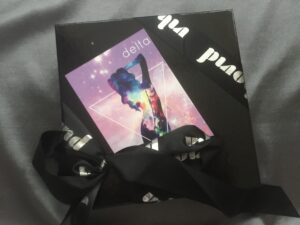 For the last couple of years, subscription boxes have been massive. Like really huuuuuge. The concept is simple, you pay a set fee, monthly, quarterly or whatever, and you receive a random box of loveliness based around the chosen theme. I’ll be honest, I’ve indulged myself a few times in these mystical mix-ups … make-up, skincare, general bits and bobs … I’ve let myself get hooked into the idea of surprise, and receiving lovely things at a bargain bundle price. It’s fun! But does the idea work with sex toys and bedroom frolics? I can see the arguments for both sides – on one hand it’s exciting and a great way to introduce yourself maybe to new things, and on the other hand, there’s potential for repeat items, things that just don’t interest you, or worst still, non body-safe bits of tat. Unbound set out to be different, but do they deliver?

I was contacted by Unbound earlier in the year, to ask if I’d like to review one of their boxes. I’ll be honest, the Delta box I have here wasn’t my choice of box, but since they were having a shuffle round of content, this is what was settled on. Unbound are an American company, and because of the mere 3300 or so miles between me and New York, things can take a little longer to reach me. That said, some US companies still regularly get deliveries to me within 3-4 days (which amazes me every time), so I wasn’t sure what to expect, time wise. Days turned to weeks, and still no sign of my Unbound delivery. A few emails and extra days waited, just for luck, it was clear my parcel had got lost, and Unbound shipped another box to me in double-quick time. I couldn’t argue with that, and I feel confident recommending their customer service based on their quick resolution to the problem. 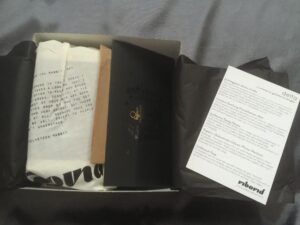 If you’d like more detailed information on Unbound you can read more about them on their website here, but in a nutshell, they’re a quarterly subscription box that will set you back $65. That’s about a $22 a month equivalent, which compared to some monthly subscription boxes out there, is really reasonably priced. They only fill their boxes with body-safe products, which is refreshing to know, and the emphasis is clearly on more luxury items. No boxes full of sachets or cheap bullet vibes here! The Delta box is a one off box, which costs $89. Compared to other boxes I’ve seen and tried, Unbound is a lot less fuss free if I’m honest. The investment seems to be more in the content than in the presentation. The outer box isn’t a sumptuous keepsake box like others have been, although you do get an Unbound branded bow and some black tissue paper inside. I’m not particularly interested in the packaging though to be honest, but if you’re considering it as a gifting option, it’s worth mentioning.

So, what was inside my Unbound Delta box? 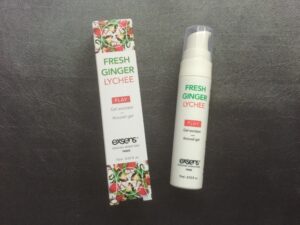 The gel if I’m honest is a bit of a letdown. When applied to my clit it does almost nothing to me. A very slight cooling sensation is felt, but to be honest, you could swipe me with mayonnaise down there and I’d feel a cool sensation – I don’t recommend mayonnaise clit wraps, by the way! After the slight chill, I get slight warmth, which lasts seconds, so it all feels a little bit pointless. The scent is inoffensive, quite pleasant actually, and it has a sweet taste, but it’s irrelevant to me because if the product doesn’t work on my body, I’m not going to use it. That said, these kind of products do tend to be love or hate, and just because it does nothing for me, doesn’t mean it won’t work for you. 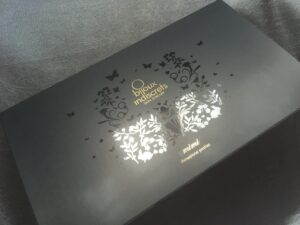 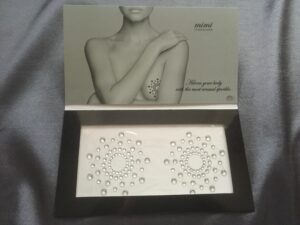 The nipple pasties are super lovely. I’m a bit of a magpie, so anything sparkly catches my eye, and these are no exception. They’re technically single use, but if you’re super careful with them, you should get a couple of wears out of them, and more with some additional body adhesive. They look lovely on, and can be worn alone, or as an addition to some sexy lingerie perhaps. Bijoux Indiscrets make some lovely pieces, so I had a feeling that I’d like these shiny nipple halos. Thumbs up from CK and I here! 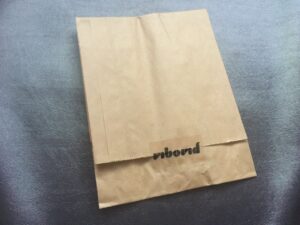 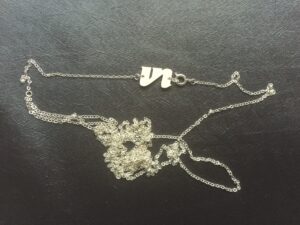 The Unbound body chain … erm, why? Maybe I’m missing something, but I just don’t see the appeal here at all. Body jewellery can be beautiful, and I’m a huge fan, but this chain is Unbound branded. No offence, but why would I want to shimmy around with the brand logo of a subscription box hanging from my curves? I don’t wear Coca-Cola bras or Ben and Jerry knickers … although I’m game for the ice cream briefs, if I’m totally honest. I get why they thought it might be a cute addition, but nope, just nope. Taking the logo away, (which I might, with a pair of jewellery pliers and something pretty to replace it with) the body chain is sometimes a challenge to master. I think many will throw it into a drawer, never to be seen again, because popping on a piece of jewellery shouldn’t be so awkward or take so much thought. If you stick with it and figure it out though, it is kinda pretty. Took me forever to unknot it after it came out of the paper bag though! 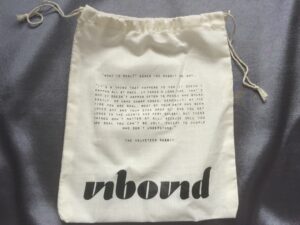 The storage bag is lovely! I’m a bit sad that it’s the thing that excites me most, but I can’t hide my joy at this cute little bag. Well made, with a quote and a good size to it, this bag will find itself housing one of my favourite toys, and the unique style of bag will ensure I can always find it quickly from in amongst my sex toy hoard. I’m easily pleased I know, but I love it! 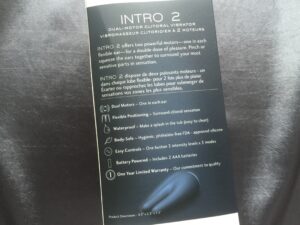 The sex toy kinda feels like it should be the pièce de résistance in the Unbound box. It’s where the main cost of the box lies, so I’d expect something good. Is the Jimmyjane Intro 2 classed as “something good”? Well, that’s going to depend hugely on your sex toy requirements and preferences. What I’ll say straight away, is that I applaud Unbound on their choice of a known, “luxury” brand sex toy, that’s body safe. Many subscription boxes have fallen into the trap of filling their boxes with cheap and nasty shite, and Unbound absolutely haven’t done that. Quality, body-safe goods all the way, which is fab. Do I like the Jimmyjane Intro 2 though? No, it’s bloody awful! 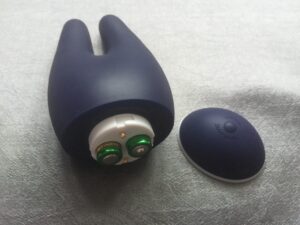 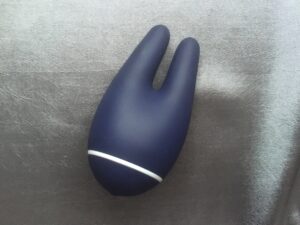 I already have the FORM 2 and the FORM 8, so I was kind of prepared to not be blown away by it, but hells bells! The Intro range is battery powered, and is Jimmyjane’s entry level collection. Given the name, I was expecting it to be a battery powered version of the FORM 2, but no, the Intro 2 is huge – It’s almost as big as my hand! It’s the biggest clitoral toy I think I’ve ever seen. Fiona from Shrek would be quite at home with its monumental size. It’s dual motored, and relatively quiet, but I suspect the high frequency vibes will deafen poor dogs for miles around. If you like vibrations that are buzzy instead of rumbly (which I absolutely don’t), then you might get along just fine with the Intro 2. It has three speeds and three pattern modes, and it’s waterproof and has the 2xAAA batteries included, but seriously, the frequency of the vibrations is so high, it’s up there with Saint Peter at the Pearly Gates. That’s the only heaven reference you’re getting from me though, because this toy is more suited to the bowels of hell in my opinion. Buzzzzzzzzzzzzz!

So is the Delta Box good value? That’s a tricky question to answer really, because it’s very hard to put a value on the two Unbound branded items, the bag and the body chain. I can source the Jimmyjane Intro 2, the Exsens gel and the nipple pasties for around $55-$60, so it really depends on your own perception of the value of the other things. I guess ultimately, you’re also paying for a service, and the convenience of buying everything together. Be aware though, if you’re outside of the US, shipping costs are quite painful, ranging from $20-$35 – ouch!

Overall, I’ve been very impressed by Unbounds level of quality and the fact that they’re striving to be different, by putting out higher level subscription boxes that are undoubtedly a great introduction to these kinds of pleasure products, or a great place to try something new. They offer box types for everyone too, no matter how you identify or your preferences – this kind of all-inclusive attitude is really great to see, and is something which other subscription boxes I’ve seen sometimes get wrong.

Are you tempted? Unbound have generously given me a code, so that Carnal Queen readers can benefit from a discount on their products. If you’d like to experience Unbound for yourself, simply go to their website and use the code CQ20 for 20% off your purchase.

Unbound kindly sent me the Delta box for free, in exchange for an honest and unbiased review. This in no way alters my thoughts or opinions. Browse Unbounds full selection of boxes here. No affiliate links have been used in this post.