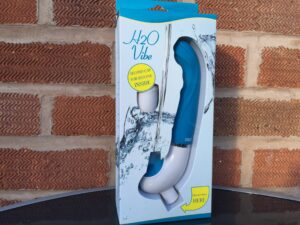 It’s a really simple idea. A vibrator made from ABS plastic and silicone, powered by two AAA batteries, which can be used anywhere when using the included end cap, or in the shower when connected to your standard shower hose. A silicone ‘spout’ facilitates a jet of water to stimulate your clitoris, and you’re free to thrust away with the body of the toy, with the vibrations turned on, or even off if that’s what you’d prefer. It’s sort of a new take on the iconic Rabbit. It connected to my shower hose with ease in under ten seconds, just unscrew the existing head (being careful not to lose the washer) and replace it with the H2O Vibe. I did get a little bit of leakage around the base, but this is going to depend on your shower hose I think, and it doesn’t impact the use of the toy. Your hands are wet anyway, so a bit of extra water won’t make a difference!

I have two showers in my house, neither of which are over a bath – this makes me very sad! I’d love to be able to use this whist lying back in the tub! My legs have a habit of buckling when I orgasm, so I had to be careful not to break my bloody neck, but I found getting down on my knees (like this is something new to me!) took away the worry of slipping over. I like high pressure water on my clit, which is no problem for my power shower, but that’s a personal choice and you’ll know what your shower is capable of. I’m a touch impatient, I can’t be bothered with teasing myself when I’m in the shower. I want to orgasm hard and fast, and I find that very easy with the H2O Vibe. The vibrations don’t rock my world, but when thrusting hard and allowing the water to work it’s magic on my clit, I find that vibrations do add to the overall experience. I tried the different patterns (there are 3 speeds and 7 patterns with no memory function) but to be honest I much preferred it to be on the highest constant setting!

The out of water end cap allows you to take the vibe into the bedroom to continue play. Am I ever going to do that? No, I’m not. It just doesn’t float my boat when used in this way. It’s a nice shape for G-Spot stimulation, but the vibrations aren’t up to scratch for me when used alone. If you’re not a power queen like I am, then you might enjoy it, it’s certainly not bad, I just have so many other, more superior toys to tickle my fancy. What can I say? I’m spoilt!

So, I know the question on your lips. Is it a gimmick, and am I ever going to be bothered with changing the shower head and using the H2O Vibe? In reality, only you can answer that, but for me, it’s definitely going to be something I use frequently. I really love the feeling of the water jet hammering against my clit as I thrust away with the vibe, it feels amazing. It takes literally seconds to change over and requires no maintenance whatsoever, Cleaning it is stupidly easy, you’re already in the shower with it! So in my opinion, if you like the feelings that this delivers, then yes, you’ll want to use it time and again.

It’s by no means a luxury product. There was a slight twist at the head of mine, because the body of the vibe wasn’t on completely straight, which could be seen because the top wasn’t quite in line with the clit stimulator. In reality though, this doesn’t matter, as I can’t feel it at all when using it. It’s a basic design that’s fairly well executed, and you know what, it works! For the general price point, I think it gives you good value, considering it offers you something so unique!

Drop of Sweden provided me with the H2O Vibe for free, in exchange for an honest and unbiased review. This in no way alters my thoughts or experiences. Right, I’m off to have another shower! 😉