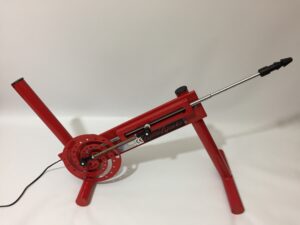 Say hello to the sleek and shiny new machine from sexmachines.co.uk – The Willie Wanka Pro Mk II. Without a doubt, it’s hands down the loveliest looking sex machine I’ve ever had the pleasure of getting to know. It’s available in the standard black or candy pink, but I don’t care about either of those … for me, it’s all about this ruby red stunner!

The Willie Wanka Pro Mk II has my name all over it. Not literally, obviously, but if I’d designed my own sex machine, then this is pretty darn close to what I’d have ended up with. Selecting a machine is all about deciding what you want from it, and then comparing offerings to find one that gives you those things. My boxes are well and truly ticked with this baby!

Solid legs for added stability in use 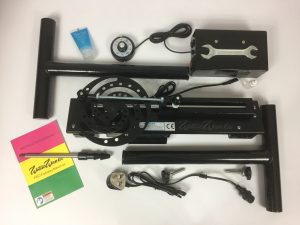 Suitable for Vac-U-Lock attachments, and compatible with a wide range of optional extras

This style of sex machine has always been my preferred choice. There’s absolutely nothing wrong with other types, it’s just personal choice. We find that t-bar legged machines like this are super easy to set up and store, and they can be used on the bed as well as the flood. My favourite has always been a long since retired machine (affectionately named Maxine), but I think she’s just been pushed off the top spot!

Why? Well, the motor in the Willie Wanka Pro MkII is more powerful. In reality, my other machines are more than capable of doing their jobs properly, but who doesn’t like to know there’s a bit more oomph coming from the engine? Maxine, and machines like the Sniper Pro never flag or falter, it just feels somehow easier for this machine. Perhaps the fact that it’s a smidgen quieter than the others adds to the feeling of power with ease? I don’t know, I guess it doesn’t really matter, I just know I love it ❤️

Thrust depth is another area that fills me with joy. Going from a shallow 1 inch poke, right up to a delicious 8 inch stroke, there’s a depth to suit everybody’s requirements. If you can get a machine that does it all, why would you go for anything else? The stroke length is easily adjusted with the included spanner. Admittedly, I’d rather it be hand altered – because spanners aren’t sexy – but in reality, you set your machine up before play, so it’s no big issue. The angle is decided by sliding the machine up and down it’s t-bar legs. It’s super quick and easy to do, it must be because even I can do it!

Teasing and torture also gets more interesting with the Willie Wanka Pro Mk II, thanks to the new and improved speed control. The machine clicks on at a slower speed than the others, which if you’re a fan of painfully slow penetration, you’ll love. I’m really not, I prefer to get a good rhythm going … but you can see why tease and torture is a skill unique to this machine ?

The only thing I’m not too hot on, is the name. I don’t know, I think the name would be more suited to a machine that just wanks willy’s, you know? That makes sense in my head. But, to quote Shakespeare “A rose by any other name would smell as sweet” and all that jazz. It’s just a name. I shall be calling my machine ‘Ruby’ … you know a sex machine has really made it in my ranks when it gets a pet name!

More power, more speed control and less noise – what’s not to love? At under 14kg, this machine is manoeuvrable and easy to store, yet stable enough to stay where you put it, even at higher speeds. Versatile, both in position range and depth of thrust, the WillieWanka Pro Mk II is a marvel. It’s the one for me – If I’d seen it on Tinder, I definitely would’ve swiped right!

The Willie Wanka Pro Mk II was sent to me by sexmachines.co.uk for an honest and unbiased review. This doesn’t change my thoughts or opinions, honesty is my only policy. Check out their full range of machines here.

No affiliate links have been used in this post.