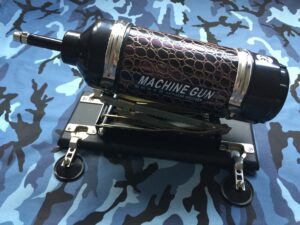 I didn’t know too much about this machine when the lovely folk at Sex Machines sent it to me for review. One thing I did know, was that I loved it to look at! Portraying a strong and robust image, I was excited to see what this machine was going to offer me. It was compact (It stores away in a box that’s 41cm wide, 21cm high and 17cm deep), looked simple and fuss free and really appealed to me visually. Was it going to command my attention and rank highly in my sex machine squad?

As I’ve said, I love how this machine looks, in fact I think it’s probably my favourite sex machine aesthetically, that I’ve tried to date. It looks a bit rugged, and I love that, and on first impressions, from a distance, it looks sturdy and well made. It arrived packed in a small plain brown box, with just the power lead and controller, the dildo and an A5 sheet of paper with instructions, which are in very broken English! To be honest, you really don’t need any direction on how to use this machine, it’s very self-explanatory, but still, having an instruction ‘Manuel’ amused me and concerned me in equal measure. 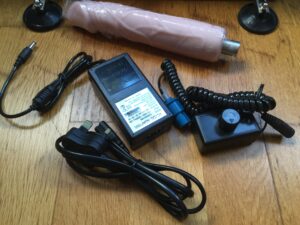 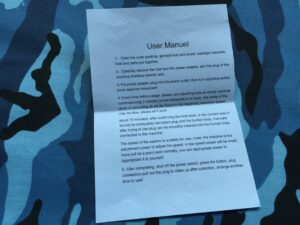 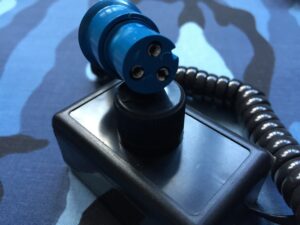 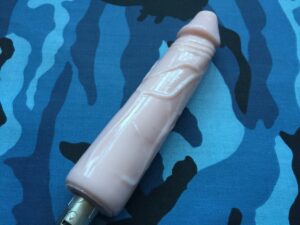 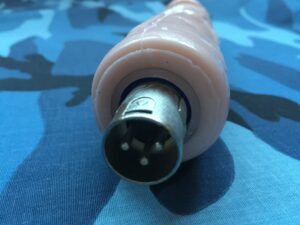 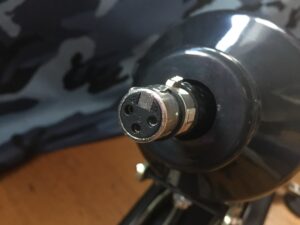 The Machine Gun is by far the simplest sex machine I’ve used. You simply connect the controller dial to the power pack and plug, by pushing the connectors together, you then push the dildo onto the machine until it clicks into place, and adjust the machine to the angle you require. The 86 degree capability excited me hugely, I’ve wanted a sex machine that runs vertically for a very long time, it opens up a lot more position possibilities, and I want to be able to be mechanically fucked whist standing up. To adjust, you just push the metal brackets on the bottom and slide the machine into the position you want. It almost ratchets into place and you can stabilize it further with the metal stand that’s towards the back of the machine. There are four suction cups, to allow you to secure the machine to the floor or another smooth surface. Once you’ve done this, you’re ready to go. 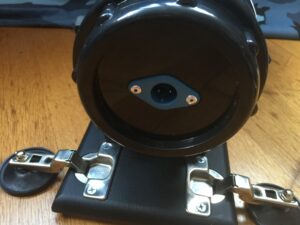 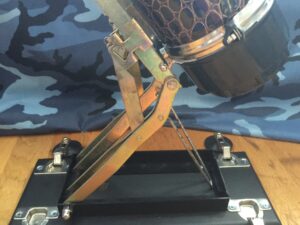 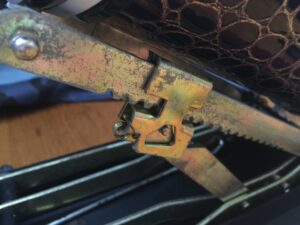 The Machine Gun is marketed as a mid power machine, capable of 300 thrusts per minute. That sounds a lot, but this doesn’t look or feel as fast as some other, slower thrusting machines I own. It has a very modest stroke depth of 2.5 inches, which for me, isn’t enough. I find in use, I get quite frustrated by the machine, because it doesn’t quite hit the spot for me. Yes, I can position myself so as the dildo goes right up to my cervix, but with such a small stroke length, I don’t then get that lovely feeling of being entered over and over again. It’s almost like an annoying internal rub! I also find that the machine doesn’t run consistently whilst being used to penetrate me, because my muscles provide too much resistance, which makes it jerky and very stop-start … Pelvic floor muscles – 1  Machine Gun – 0

The floor suction cups are a great idea, but sadly they don’t deliver. They don’t stay stuck down, on any surface we’ve tried. It’s almost like they’re set a little bit too high, so they stick for a while then natural just pop up because they’re under pressure to return to their natural position. When using the machine vertically, it stays fairly grounded, but if you try to use it totally horizontally, on a smooth surface, the machine tries to run across the floor. Amusing, but alas, not very practical. This made me cautious when using the machine with me on my back, with the dildo positioned deep inside me, because if the machine lunged forward, it bashed my cervix, which was a little uncomfortable. 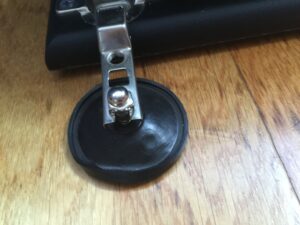 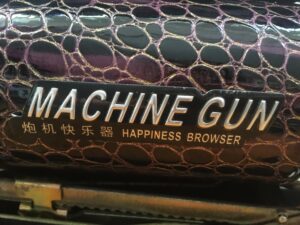 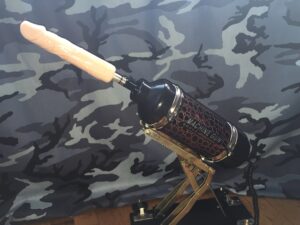 Sex Machines very kindly sent me the male masturbator that fits the Machine Gun, so CK could get in on the action too. I was a little concerned that the machine would struggle with the weight of a masturbator, but thankfully, the beer bottle style stroker is much lighter than something like a Fleshlight, and the machine handled it with no running problems at all. CK, like me, generally likes to feel a longer thrust length when using strokers on sex machines, but he did actually quite like using the Machine Gun, as he could enjoy a more gentle stimulation, either near the base of his cock or centred more around the head. Perhaps this is one of the largest benefits of using this machine – if you’re a man, who likes shallower strokes and would prefer a machine that’s less frenzied in the way it operates, then you may actually really get on with the Machine Gun as it’s much more gentle. Equally, if you’re a lady that likes very shallow vaginal penetration, I think this machine could be well suited to you. For anal penetration, we found this machine to be a no-go, it just doesn’t pack enough Oomph to overcome the greater resistance my ass provides, sadly!

For me though, I really do struggle to favour this machine, because for the price point, I know that Sex Machines sell some pretty awesome products, which knock spots off the Machine Gun. It’s a bit unrefined around the edges, and whilst the concept is fantastic, the execution isn’t quite on par. Perhaps if I’d not already sampled some of their great offerings, I’d feel differently, but honestly, the Tool Box, which you could be forgiven for thinking would be less powerful, is a more powerful, stronger and deeper thrusting machine. If you want a discreet, low budget fun machine, my recommendation would be firmly with the Tool Box, and if you can afford to invest just a little bit more cash, well, they have some mind blowing sex machines on offer!

I wanted to love the Machine Gun, I love it’s simplicity and compact design, I love how it looks, but sadly for me, it leaves me wanting. My search for an awesome, vertical thrusting sex machine continues …

Sex Machines very kindly sent me the Machine Gun for free in exchange for an honest and unbiased review. This does not alter my thoughts or opinions in any way. Go check them out here, their service is brilliant and they have some fantastic machines! You can find the Machine Gun here. No affiliate links have been used in this post.