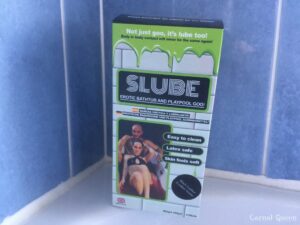 Our Slube journey started back in June at the ETO show. It was their first event, having only just got hold of the product themselves a few days earlier. As soon as we walked through the doors to the Pavillion, people were directing us to the Slube stand …

“Have you seen Slube yet?”

“You NEED to go and see Slube, it’s brilliant!”

“Have you dunked your arms in the bath full of goo?”

There was a definite buzz, and there was most definitely a bath full of goo, so we headed over there pretty quickly. The tub was full of green gunge, and it looked fantastic. CK’s eyes lit up, and he was straight in it up to his elbows. I’ll admit to being a bit of a girl about it – I had rings and bracelets on, which I didn’t want to get all gooey, so I was a bit more reserved with my finger dipping. I knew there, in that moment, that CK would get me Slubed up in the not too distant future, sometimes you can’t fight the inevitable.

Getting our Slube on…

We chose to test and review the leather scented variety of Slube. Really just because it’s something different. You can get lubes and massage products in fruity or sweet scents quite easily, but leather is unusual. Besides which, I adore the smell of leather. You can often find me in the fudrobe (fucking wardrobe) just sniffing all of our impact and restraint gear. It’s a scent that almost guarantees to get my juices flowing. And if that wasn’t enough, the leather Slube is black in colour. Hubba Hubba! My dark side was excited about romping around in black gunge, I’m not going to lie.

How to use Slube

You have two ways to enjoy Slube. Firstly, you can use all of the product in the bath, for a bath full of lubey-gooey-gungey goodness. Alternatively, you can mix it up in small batches, to have some playpool fun! At around £20, using it all in one go does make it a single use product, and therefore a little indulgent. If you opt to use it in a play/paddling pool though, the 250g bag will go quite a way. You only need to mix 7g of Slube per litre of water, so you’d easily get a few sessions from one box. The choice is yours! We knew we were going to go for a bath full of Slube though, it was just too tempting.

It’s very easy to prepare the Slube. Simply fill the bath to just under half way, and sprinkle the contents of the bag into the water. We used relatively hot water, and it worked really well. CK stirred the bath water around and felt the water thicken quite quickly. It really only takes around a minute or so to turn your bath of water into a bath full of Slube goo.

We let it sit for five minutes, just to allow the temperature to settle a little and for me to pluck up the courage to actually get in it. CK found it hilarious that now it was ready, I was getting all hesitant. I don’t know what it was, but I suddenly didn’t want to get into the Slube. I guess I grew up watching people getting gunged on Saturday morning TV, and all those images came back and put me off a bit. If you have issues with slimey things, you might not relish the thought of Slube!

I’d committed to testing it though, so test it I would! I very tentatively stepped into the bath, one foot at a time … and nearly fudging killed myself. It’s obvious that this stuff is going to be slippy, and I was prepared for that, honestly, but I got into that tub with all the grace of an elephant in an ice rink. Where’s Torvill and Dean when you need them? Because I could seriously have used some tuition right about then! CK stepped in behind me, like he was walking on the world’s grippiest surface. How? I’ve no bloody clue, but I thought he was a knobhead for being able to do it, after I’d just Bambied in.

OH.MY.GOD … I knew the moment we both settled back into the slimey contents of our bath, that I loved Slube. It felt glorious as we both sat and poured it over each others bodies. We have a corner bath, so we have a little bit more room than in an ordinary tub, which was useful. I lay back between CK’s legs as his hands expertly caressed my whole body, trailing copious amounts of lubey goo all over my naked form. I don’t think it smelled of leather. CK could detect a hint, but for me it reminded me of an old-fashioned cologne. It’s quite a rich, masculine scent, which is lovely. They use leather in a lot of aftershaves, so I guess there’s the leatheresque bit, but it doesn’t smell like my leather whips or cuffs *sad face*.

We lay and caressed for ages, sliding body parts across each other and working ourselves up into quite a frenzy. I’d taken the Sh! Cupid dildo into the tub, and it didn’t take long for that to come into play. Slube is divine for dildo-fuckery. They glide effortlessly in and out of me, with absolutely no resistance whatsoever. It can be awkward in the bath sometimes, because water-based lube washes away too easily, and you can’t use silicone based lube with silicone toys, but Slube solves that issue. Because you’re totally submerged in it, it just does its thing, without going sticky or being fucked away.

I didn’t want to get out!

Like two big kids, we just sat and played in it too. Plunging body parts under the surface of the Slube, and coming back up looking like we’d been jizzed on by Spiderman is great fun! Slippy and stringy, but never sticky! Two hours later, we thought we should probably get out. It was still holding a little bit of heat though, much more than water would be, two hours after getting in. I know this, because I’ve often woken up freezing cold in a bath full of cold water!

If truth be told, I didn’t want to get out. I wanted fucking, but although we’d managed penetration, we couldn’t go hell for leather at it, like we both wanted to. Well, not without one of us (or both) face planting the side of the bath anyway! Reluctantly, CK got out and I ran the hot tap to fill the tub right up. You need to do this to dilute the Slube before you send it down the drain. I lay there, in the now hot again bath, just relaxing. It feels lovely on the skin. It does dilute somewhat, but it still has a huge amount of slip to it. There’s still plenty of lubrication for some dildo play – I tried that again, just so I could report back to you, of course! This means the mixing ratio of Slube doesn’t need to be exact, because even in a full (large) bath of water, it was still very slippy, and better than many lubes I’ve tried over the years!

I didn’t want to pull the plug, and if I could’ve saved the Slube somehow, I would’ve! But I did send it down the drain, and it went easily and left very little to clean up. Just a quick swill with water and you’d never have known the bath had been full of black goo just minutes before.

It washes off the skin easily, and left me feeling soft and hydrated. Certainly not the nightmare I half expected clean up to be. It’s non-toxic, dermatologically tested, and safe for internal use, so you’re in safe hands with Slube. It won Innovation of the Year 2016 at the Sexhibition awards too!

My only Slubey niggle is that you shouldn’t eat it. I really want to see an edible version, because I really wanted, no, needed to get my mouth involved in our session. Flavoured ones would be awesome!

Buy some, even if it’s just once. Everyone needs to try Slube!

The guys at Slube sent me the leather scented goo for free, in exchange for an honest and unbiased review. This in no way alters my thoughts or opinions. You can find Slube at Lovehoney or Uberkinky. Affiliate links have been used in this post.