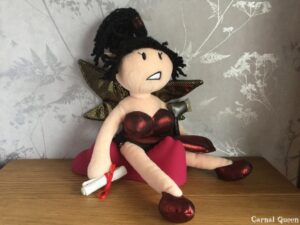 I’m not gonna lie, I like to read a bit of erotica every now and then. Ok, you got me, I like to read erotica quite often. Who doesn’t? It’s fantastic at getting the old juice factory going, it’s a big turn on, and it sometimes inspires us to try new things. I guess it stands to reason, when you’re getting all hot and sweaty under the collar, sometimes you’re going to want to have a bit of play. Now, that’s not too much of a problem when you’re reading on something like a Kindle, but when you’re old school like me, and you like to see words on paper, it’s a bit of a bitch to do. Lots of ‘Ooh’s’ and “Ahh’s’ as you get more and more turned on, then wait, put the toy down, because you need to turn the page. It’s a bit of a passion killer!

The Ruby Glow is a saddle type toy, designed to be sat on for masturbation. Think of it as a Sindy Sybian, without the penetrating bits! It’s covered in silky soft silicone, has two independent motors, ten settings (3 speeds 7 patterns) and is splash-proof. It runs on two AAA battery’s which are included in the box. It’s a non penetrable sex toy, providing you with vibrations to stimulate your clitoris, your whole vulva area and the perineum. The buttons are conveniently placed on the front of the clitoral mound, one button to turn on and adjust the settings of each motor, with a longer press needed to switch them off.

It’s just shy of 7 inches long, and isn’t really body specific, you certainly haven’t got to worry about if this toy will fit you, because providing you have a clitoris, vaginal opening and a perineum, in that order, it’s going to be just fine. Sure, you’ll need to make a couple of adjustments to get it in the right place for you, but that just means you might need to tilt your hips up or down, to get your clit in the right place, or wriggle about a bit. No biggie. There’s a bit of noise associated with sitting on this too, which I guess is something that is unavoidable given the fact that it’s vibrating away on the chair. Harder chairs give more noise, so that’s something to bare in mind.

Designed to be used clothed, the Ruby Glow has a simple two button operation. One for each motor, it’s very straightforward. Because it’s covered in body-safe silicone though, you can happily ride the Ruby Glow butt naked, I just wouldn’t advise you sit in the window to do it. Here’s where I hit my first hurdle – I doesn’t work for me when I’m clothed. Jeans are a huge no-no, because the bitch of a seam that runs down the front of them really hurts when you’re grinding it into your lady bits! Other clothes, they’re a no too. Skirt get too much in the way, so you end up pulling them up anyway and even thin trousers or PJ bottoms impact the vibrations too much. Birthday suit it is then.

So what’s the second hurdle? Sadly, the vibrations themselves. If I sit down with a good, raunchy book, and get myself going on the Ruby Glow, it feels really great. I’m already turned on by the filth I’m reading, but the Ruby Glow really helps to turn my more mental arousal into physical pleasure. But I just can’t get off with it. I can rub, grind, and hump until my hips are sore and my clit’s on fire, but no big O for me. If I start with a bit of a session before I mount my new silicone friend, and I’m already gagging for an orgasm, I can get there, just about. But that’s not really the way I want to use it, or why this appeals to me in the first place.

I really wish it wasn’t battery powered. Perhaps I’m turning into a sex toy snob, but come on, it’s 2016, a toy that’s rechargeable isn’t asking for the moon on a stick is it. Even budget or entry level toys are USB rechargeable these days. Battery’s for sex toys feels a bit 90’s, and I wish they’d gone out of fashion with the Fugees, Adidas popper tracksuit pants and Tamagotchis!

Another improvement I’d love, is a third button, which kills all motors. Imagine being sat at your table, erotica in front of you, Ruby Glow buzzing away between your legs on the firm chair, and your partner walks in, phone in hand, saying “it’s your Mother” … die toy, die! Pushing both of those buttons for a couple of seconds, feels like a lifetime of waiting. One button, who’s sole purpose is to kill both motors, would be a fan-dabby-dozy addition, and a potential embarrassment saver!

If this had loads more oomph, I’d be installing one on almost every chair in the house as standard. I think it’s a fantastic idea, and if ever a mark II model launches, I’d be excited to see if the vibrations were worth shouting about. It’s an awesome concept, and would be fantastic for anyone with mobility issues or dexterity problems. If you prefer more gentle vibrations, you might just be able to get your rocks off, with the Rocks-Off Ruby Glow!

Rocks-Off kindly sent me the Ruby Glow for free, in exchange for an honest and unbiased review. This in now way alters my thoughts or experiences. You can get yourself a Ruby Glow directly from Rocks-Off here, or from Lovehoney here. Affiliate links have been used in this post.