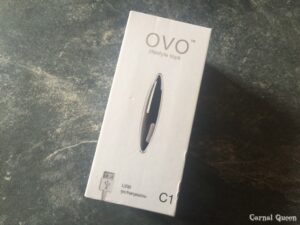 The C1 is a bullet style sex toy, made by the German company OVO. I was really pleased when OVO reached out to me and asked if I’d like to review some of their products, as I’ve never had the opportunity to test any of their toys out before. I’m always really excited to try things from new brands, because it broadens my horizons and hopefully it broadens the horizons of my readers too. This C1 one review is the first of three toys they sent me, so keep your eyes peeled for more OVO reviews to come!

The first thing that struck me was the really clear and contemporary packaging. It kind of reminds me of iPod boxes in years gone by. It’s nice! It features a simple image of the C1 bullet in your choice of colour, mine is black, and on the back its details the product features. The first one on that list is a 15 year warranty. 15 years! That’s pretty rare for a sex toy. It tells you it’s showerproof, made in Germany, has seven programs, is made from 100% body safe materials, is whisper quiet, and that it has a powerful motor. It also tells you that it utilises lithium-ion technology and that a USB charger is included in the box.

Charging the C1 is very simple to do. You simply push the included charging cable into the self sealing port at the bottom of the toy and plug it into your laptop or a wall USB plug. I left mine to charge for a couple of hours, and I knew it was fully charged when I returned to it, because the lights were constantly lit and not flashing. There are only two buttons on the C1, and it’s very easy to use. A one second press of the plus button fires it into life and you simply cycle through the 7 settings using the plus and minus buttons until you find one you like. There are two constant modes, and five patterns. When you’re done, another firm press on the plus button will turn the toy off.

There’s no getting away from the fact that the C1 is a buzzy vibrator. Now for you, that might not be a bad thing, but my preference is definitely rumbly vibrations. Having said that, surprisingly I can consistently reach an orgasm with the C1. I am quite surprised by that if I’m honest. It takes a while, but I get there. It happens for me on the first setting, and although this is buzzy, it’s the least buzzy of them all. I think the shape helps too, it’s relatively pinpoint but it isn’t pointy or sharp, so I’m not getting all pokey on my clit. As is normally the case for me, I’m not fond of the patterns.

In terms of power, the C1 isn’t going to move mountains for you, but it’s more powerful than most bullet vibrators that I started my sex toy journey with. If you’re used to cell battery powered toys, you should find that this is a step up on the power-scale.

I like the discretion that the C1 offers. Noise isn’t really an issue because as promised, it is quite quiet. The shape is also very discreet, and if this was thrown into the bottom of your bag and was spotted by someone, they wouldn’t see it and automatically think ‘oh, that’s a sex toy!’, which is good. It’s also a great toy for use with a partner. It can easily be used between two bodies during sex, and is also quite good for stimulating the penis, because it’s not too harsh.

OVO kindly provided me with the C1 for free, in exchange for an honest and unbiased review. This in no way alters my thoughts or opinions. You can pick up your own OVO C1 directly from OVO here. No affiliate links have been used in this post.