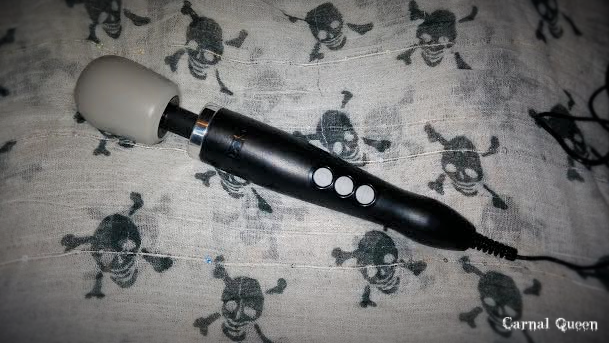 As you all probably know, I love my Doxy Wand, but I’ve never got around to actually writing a review for it. The lovely Ella got the gift of Doxy for Christmas (though she didn’t wait until Christmas day to get her mitts on it!) and has written a review for Carnal Queen – Thanks Ella!

The Doxy wand. Oh how I wanted one. Not even chocolate – hell, not even pizza has ever stirred such a naked lust in me before, and just as he’s been known to do with afore mentioned indulgences, my husband made me wait before giving in to my desires and ordering me one for Christmas.

Well, JC’s birthday has been and gone, and now there is a Doxy in the building. I have it in my clutches and, man, have I made up for that wait!

My initial thoughts on tearing it from the brown delivery box with my teeth were, aah, nice simple sleeve with hard inner packaging that’ll serve as a storage box. Though I would like something more permanent for it, I’m happy to leave that white box lying on top of the drawers in our room for now, as only people who know what Doxy products are will know what’s inside, and all they’d probably say is, sweet!

I was told “DO NOT open that until Christmas Day” and I smiled and nodded in agreement like the good girl I am. Anyone who knows me will know I had my fingers crossed behind my back the whole time. A character in one of my favourite books said ‘it’s better to ask forgiveness than permission’ and where my husband and sex toys are concerned, I kinda live by that quote like it comes from the Bible.

As soon as I got the chance, off came the cellophane and out came the Doxy. I was surprised not only by the weight of it, but by the size. It’s just so big! I have a couple of wands now, and the Doxy seems mammoth in comparison. It isn’t, but it certainly feels it.

It looks sexy, and my expectations of what it could do made it a little bit unnerving. I had wanted a white one, but my husband preferred black so that’s the one he got, and I have to say, I’m pleased he did. It feels a little more intimidating than the other colours would have, which is always a good way for him to wheedle his way into my mind at the start of play.

The head is delightful. The heads of the other wands I have are hard, but the Doxy head is squishy soft. It reminds me of a padded faux leather foot stool that used to knock around in one family members front room or another when I was a kid. Strange association, I know.

The padding feels much nicer against the skin than a hard plastic does, and I’ve discovered I can tolerate having it pressed quite firmly over even bony areas when used for massage without feeling any discomfort or tenderness.

At 7.5 inches in circumference, it accommodates the handful of wand attachments I already have perfectly, so while I wasn’t really fussed with my old mains powered wand, I’m now looking to expand my collection of those. Even though this seems to be a generic size, I find getting pinpoint stimulation with the Doxy far easier than with the others. I think it could be the overall length of it that makes handling simpler for me.

So, as I was alone, I thought I would go one further than just an inspection, and I decided to check out the vibes. It came on full and I nearly stroked out with joy. So much power!! Even when I turned it down to the lowest speed I could still feel the deep, rumbly vibrations all the way up in my shoulder. It was quieter than I expected too, especially under the covers, though the sound it makes when on full speed does travel through a quiet house, so be warned if this is an issue for you.

Despite being told not to open it, I had it in my hand and buzzing merrily away, so the natural next step was to use it. The first time I came it happened so fast I almost missed it, and that was just on the lowest setting. In that one rather quick, very sneaky session I managed to come three more times, and in between each orgasm, I squirted, making quite a mess. I didn’t need it on full speed to make any of that happen either, so huzzah for that.

In subsequent uses I’ve reached orgasm every time, though there has been an occasion or two where I’ve come so fast and so hard it’s quickly become… unpleasant. I’m a lot better than I used to be, but I’m not a quick comer, so the surprise of having such intense orgasms so quickly kinda incapacitates me, and I can’t move the Doxy or turn it off fast enough. That means I end up getting a bazillion intense vibrations pumped right into my clitoris, sending it into a frenzy of STAHP!!

But more often than not, all I get from this is fantastic orgasms, the likes of which only a few other ‘use-alone’ toys have been able to offer me. No matter the position, the situation, or the duration of play, I know that the Doxy is going to get me there.

My husband loves this thing as much as I do, but not just for what he can do to me with it. He’s very enamoured with popping his Hummer attachment on it, and just teasing his cock on the lowest setting while I perform other tasks, which has provided some explosive results. I’ve spent some time massaging him with it too, and he rates it over pretty much any other toy I’ve used for this purpose.

In my reflective moments I kinda hate my husband a little for making me wait so long before getting one of these, but I know that as soon as I see it in his hand again all will be forgiven. If you’re looking for a powerful, versatile, customisable product, you’ve found it.

Huge thanks to Ella for the awesome review. If you’d like to read more of her work, you can catch her over at Scandarella. Would you like to have the Doxy experience for yourself? You can grab one from Lovehoney, Uberkinky, or Sextoys.co.uk (who also stock the euro mains version). Affiliate links have been used in this post.