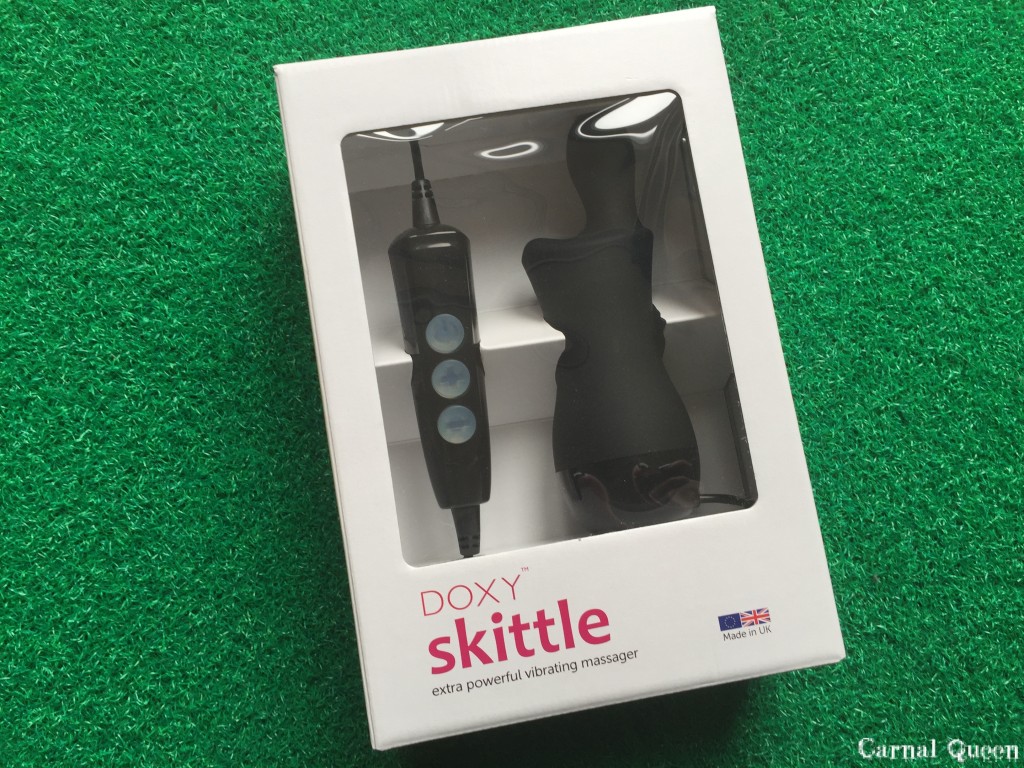 It’s taken me a while longer than I intended to write this review, because to be totally honest with you, it’s taken myself and the Skittle quite a while to get fully acquainted. A relationship that I thought was going to be straightforward from the start, turned out to be not all hearts and flowers straight away, but we’ve pretty much got there in the end …

I first found out of the Skittle’s existence at the ETO show in June, to say I was excited was an understatement … We got to have a play and feel of the toy, and the power it exuded was evident. I was a total Doxy nut already, being the proud owner of an original Doxy wand (and since then, the Die Cast model) so I was no stranger to their levels of power, and to have it in this new, exciting shape, was something special, I was sure. It was kind of revolutionary, a toy which would have no instructions, no real suggested way of using it. The Skittle would become whatever you wanted it to be … I needed one! 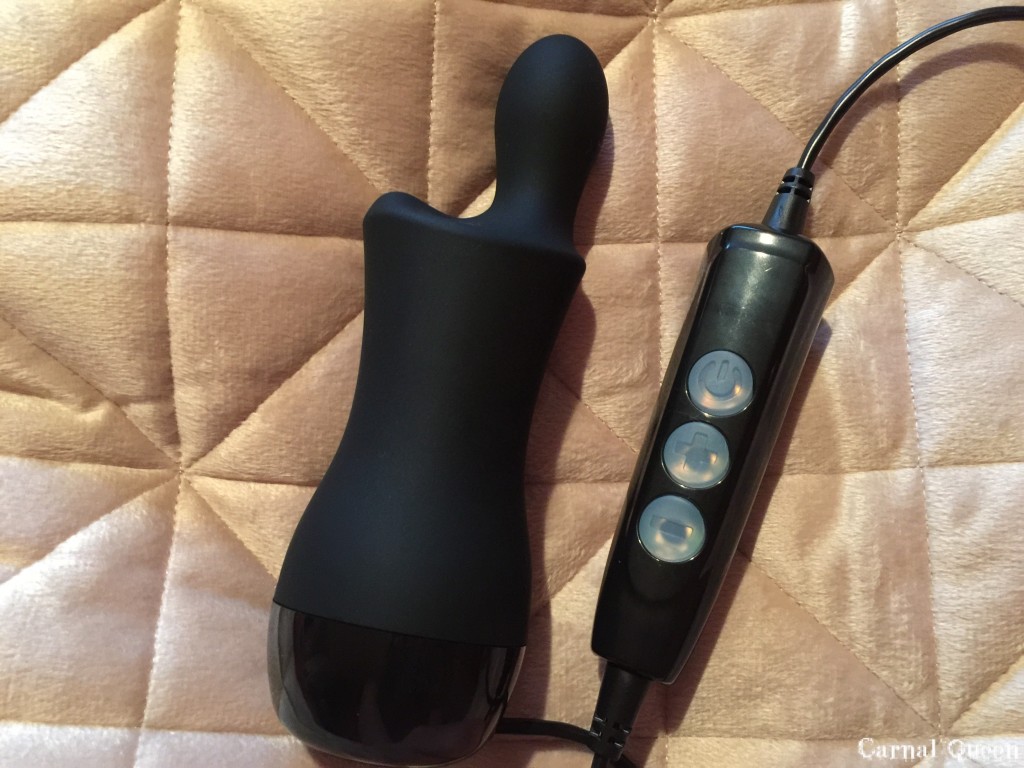 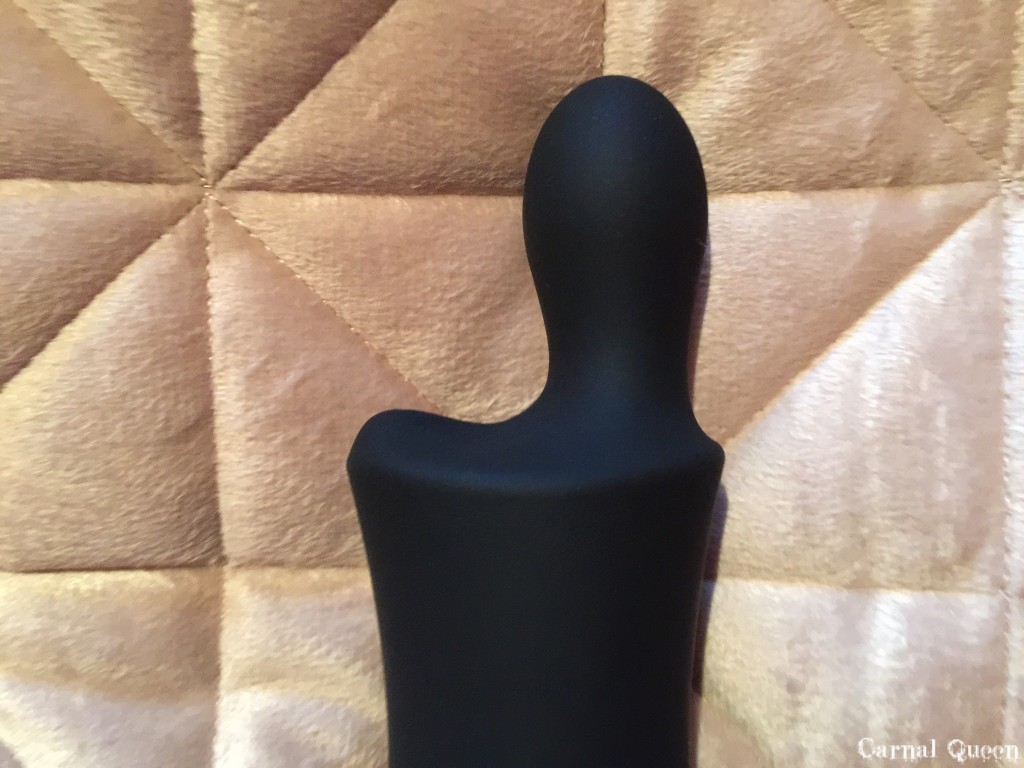 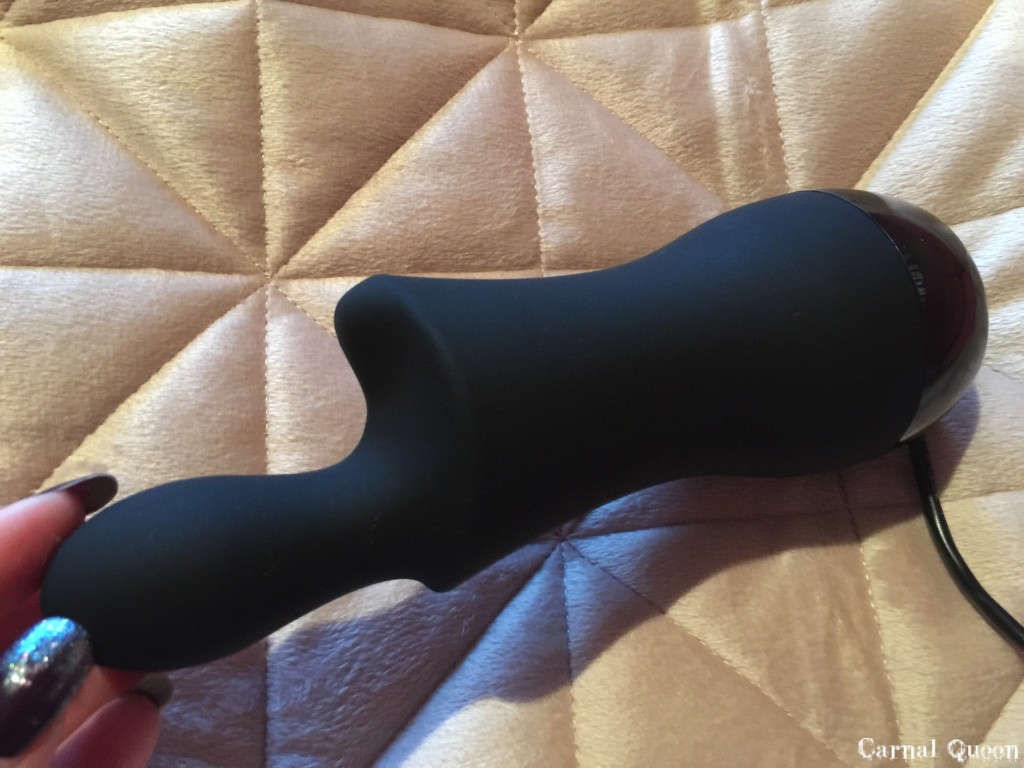 Fast forward a few weeks, and the intriguingly shaped, silicone power pin was launched. Arriving modestly boxed, I was keen to see just how well those heavenly vibrations that I’d felt in my hand, would transfer through my body. I wasn’t prepared to feel slightly let down by the Skittle on its first outing. It totally threw me, and I didn’t understand what was going on. I just couldn’t bring myself to orgasm with it! Sure, there were moments when I was close, but sadly no release. The Skittle is powerful, it’s rumbly, it’s pretty pinpoint stimulation, when you compare it to the head of a wand massager – all these things I usually love in a sex toy, so why did the Skittle seem to cause me an orgasm strike?

I think initially, I just didn’t know what to do with it for the best outcome. The “no rules” way of using, which had excited me, left me with too many options. I wanted to try it in every which way, and when I didn’t get a speedy result, I moved on to the next potential orgasm inducing scenario. I needed to slow down, and make friends with my new toy in a less forced way! 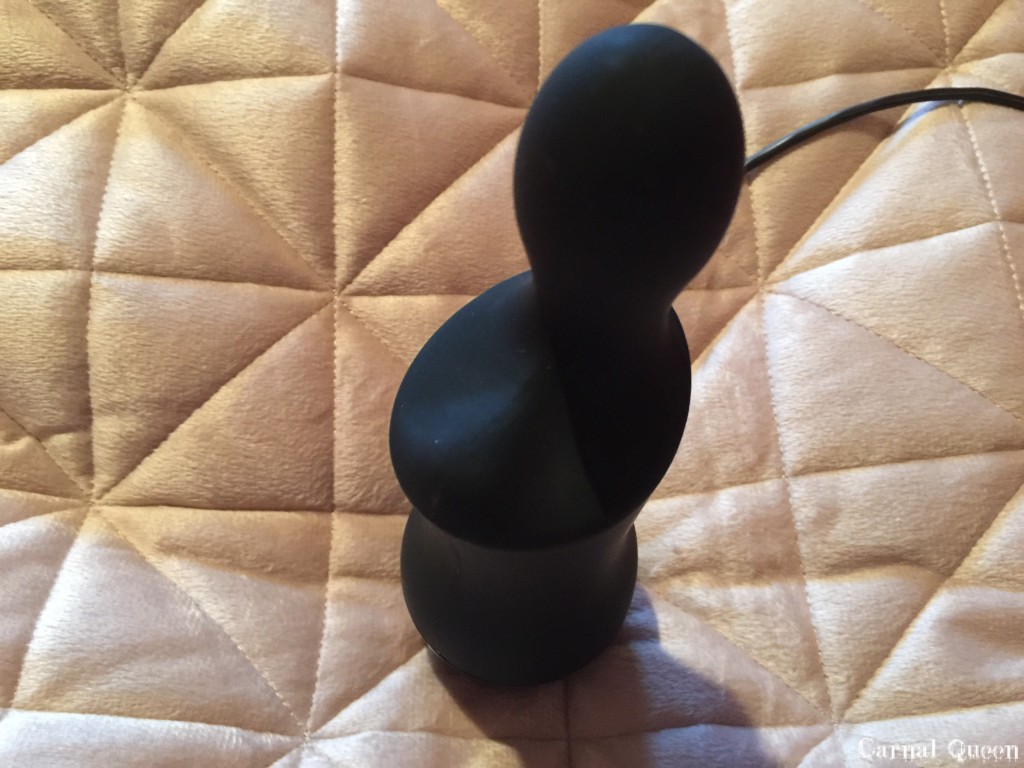 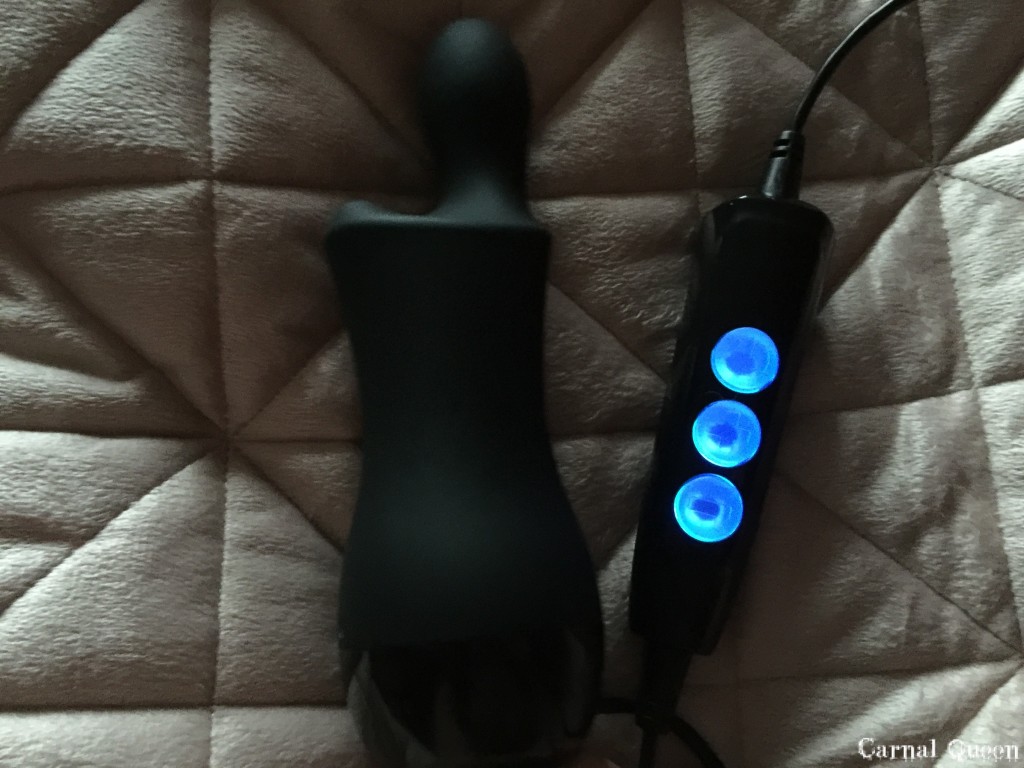 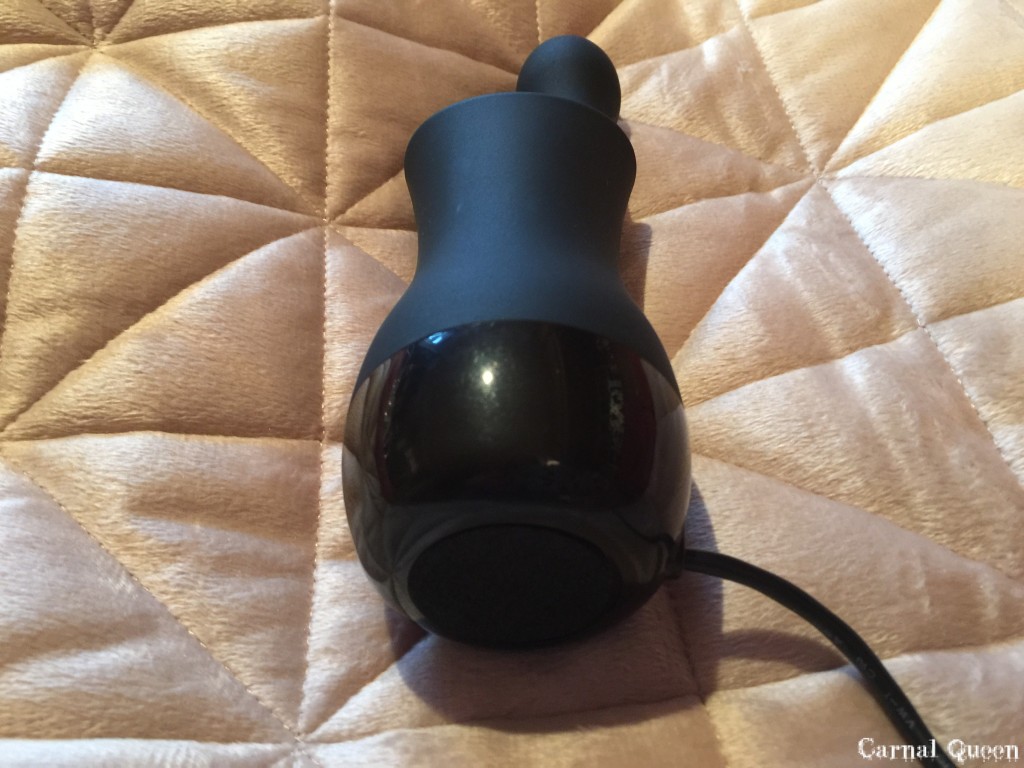 In the hands of CK, as is usually the case with any sex toy, my Skittle orgasms came hard and fast. They’re strong and feel amazing, and because he has far more patience than me (and because he likes to make me wait!), they build and build until my release is ripped from my body. So, taking a leaf from his book, I explored the Skittle at a slower pace. Used as a vibrator on my clit, the Skittle does feel good for a slow building climax. I usually just go for top speed and quick orgasms, but for me that doesn’t work with the Skittle, I need to start off gently, working my way through the speeds. As with the Doxy wands, the Skittle has a pulse mode with escalating vibrations, which you access by pressing and holding the power button. It’s a nice feature, but for me, I need the constant vibrations. On the lower speeds, the ‘finger’ type bulbous end travels back and forth, which can be seen easily, the higher the setting, the more of a blur it becomes! When you watch it in slow motion though, it actually looks to travel more on faster speeds.

When I insert the Skittle vaginally, that little nub on the top of the main body of the unit, just fails to reach my clit, booo! What about the ‘finger’? Well, that just fails to reach my G-Spot, so double booo! It still feels very pleasurable, because the vibrations are just so deep and rumbly, but I’m not going to lie, it’s disappointing! Used anally, the finger feels blooming delightful, and that little nub that avoided my clit, nuzzles nicely into the perineum. This lends itself to adding additional clitoral stimulation for me, and my word, that’s when the Skittle experiences excel themselves! A friend suggested use of the Skittle anally in conjunction with the Womanizer … MIND BLOWING! There are no words to fully comprehend just how good that feels. Yes, it requires a bit of clever positioning to be able to get comfortable, but it’s so worth it!

I love the look and feel of the Skittle, I love the fact it’s silicone and ABS plastic. I love that the controls are quite a way down the 4 metre cord, meaning they’re easy for my partner to use and I’m unrestricted. I love that it’s not too loud for a powerful toy, and that it has no set purpose or gender in mind. I love the feel of it anally, with added clitoral stimulation. BUT, saying all that, I still feel like it’s a little lacking. I wish that nub hit my clit … I wish the ‘finger’ was a bit longer, to fill me more and to hit my sweet spot … I wish it had an extra level of power, because I keep finding myself hitting the plus button, trying to get just that bit more power out of it …

No denying it though, I do really like the Skittle. Maybe you’re considering it for your first foray into the wonderful world of Doxy? Perhaps you want to experience their deep. thuddy vibrations but don’t generally like wands, or you prefer more pinpoint stimulation? Maybe you just want to try something totally different …? The Skittle may just be the one for you!

You can pick up your own Skittle from Belle De Soir or Lovehoney. Affiliate links have been used in this post.