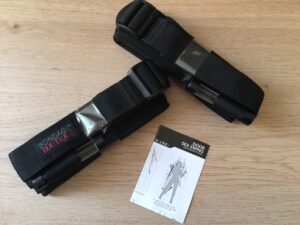 I think we’ve all seen it on television programs and in films haven’t we? A couple managing to go hard at it up against a wall, without any struggle or a care in the world. It always looks sexy and fabulous doesn’t it, but the reality of trying to master the art of fucking vertically is worlds away from how it’s portrayed on the TV!
Perhaps it might not be too difficult if you’re a massive body builder and your sex partner is as light as a feather, but come on, most of us aren’t going to fall into that category, and so sex like this is going to be really hard work, physically tiring, and quite often just bloody impossible!

The Bondage Boutique Over the Door Sex Swing might just be the answer to your problems – It’s reasonably priced, really easy to set up, and all you need is a strong, sturdy door to use it on. I would probably recommend an internal door though, your neighbours might not appreciate the floor show (Actually they might, but it’s not worth the risk of being arrested). Simply throw the two acrylic barbells over the door and close it to hold them in place, lock it if you can, just for extra security. The person to be raised into the swing then puts the very roomy neoprene straps around their thighs, and with the help of the other person and the arm straps that are attached near the top of the ‘swing’, they hoist themselves up into position and with a bit of adjustment, they’re ready for some door-based action. 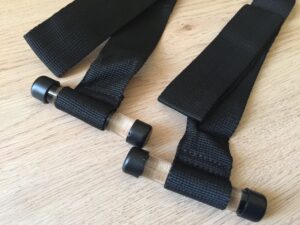 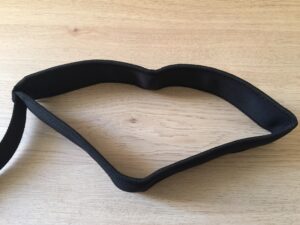 Sounds really good in theory doesn’t it? Well actually it is good, I mean it’s not totally perfect, but this isn’t an expensive piece of kit, so we can’t expect the world, can we?
It’s well made and seems very sturdy. The straps are capable of holding 140kg/22st in weight, so it’ll be suitable for most people, and they are adjustable to allow for any height issues you may have. Getting into the swing isn’t a very pretty sight though, and you’re probably not going to want to use it with someone you’re not totally body confident with or someone who you’d mind seeing your wobbly bits being hauled around! The thigh straps are relatively comfortable, as they are slightly padded, but they’re only a couple of inches wide, so when I say comfortable, I kind of just mean functional and not unbearable. The arm straps aren’t padded though, they’re made from webbing strap, a bit like rucksack straps, and although they’re ok to hold, if you put them around your arms, they can rub a little, but it’s not anything horrific.

It does feel a bit strange calling this a swing … we do have a sex swing, and it’s nothing like this. These are two totally separately straps which aren’t joined together at all. You need to have quite a bit of core body strength with these, especially for getting into position initially – if your partner is able to help take the strain off your arms during use, once in it, you’ll be fine. I think it might be a little easier if there was some kind of seat strap between the two straps (you know, like an actual swing), but it’s perfectly usable without one. 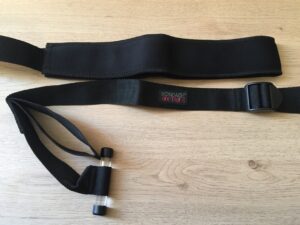 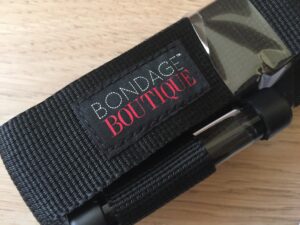 Obviously, when you’re in your suspended position, your range of movement is going to be restricted, so it’s great for teasing etc, and if your partner uses something like a wand vibrator on you for example, you’re not going to be able to get away from it, so it can almost cross over into being a torture swing! Sex does feel fantastic, but if you like to arch your back and expose your G-Spot more during penetration, you’re going to struggle, because having the door right behind your back prevents you doing this. For me though, that’s not what this swing is about, it’s about achieving that vertical position and having sexy fun with your lover!

It’s quick, easy, strong and good value. A full size sex swing isn’t an option for everybody, and this is a way of bringing elements of a sex swing into play discreetly and without having to have hooks in your ceiling. Certainly worth exploring in my opinion, just make sure your doors are up to the job first!

Lovehoney kindly sent me the Bondage Boutique Over Door Sex Swing for free, in exchange for an honest and unbiased review. This in no way alters my thoughts or experiences.

If you’d like to purchase one for yourself, you can do so by clicking through the appropriate link for your region.